Aretha Franklin was a no-show at Whitney Houston's funeral on Saturday because she was suffering from leg spasms, or was it because she angered the late singer's mother with remarks she made during a Friday appearance on "Today"? Was it a little disrespect? 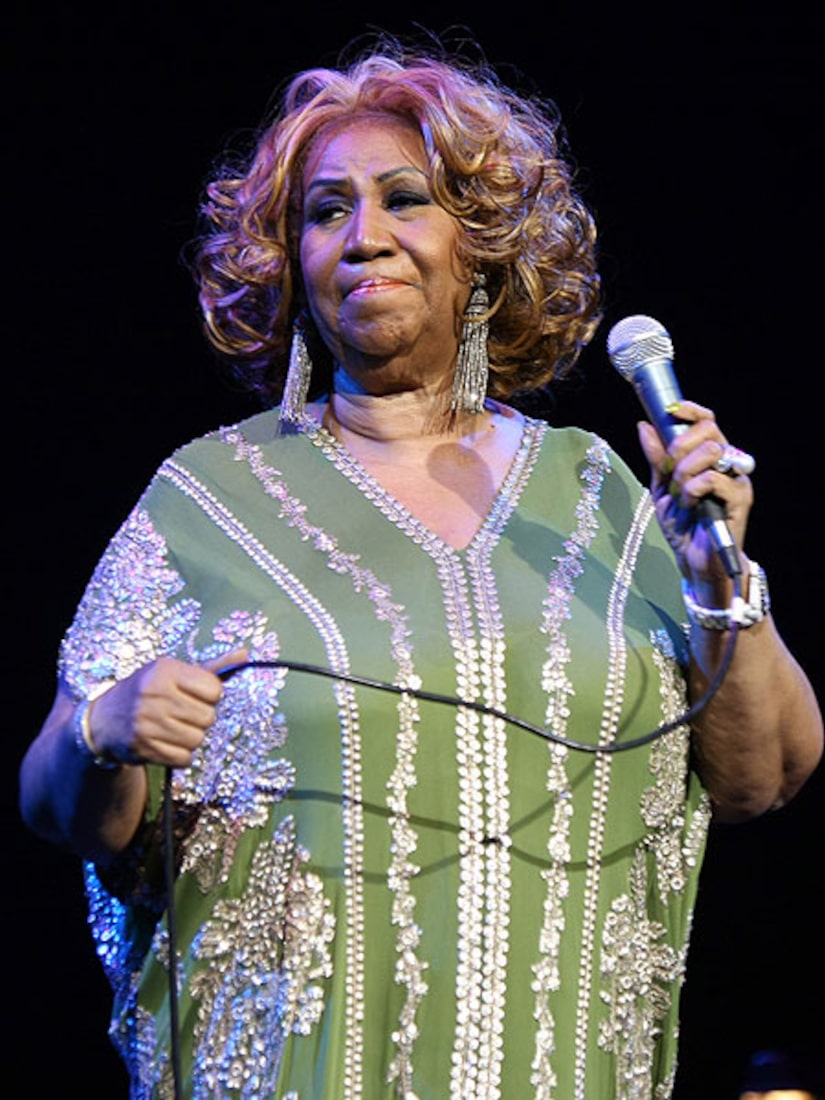 Franklin, 69, unexpectedly canceled her scheduled performance at Houston's funeral service. Dionne Warwick was apparently unaware that Aretha wasn't there, and called for her to come to the pulpit, saying, "Oh, 'Re's not here?"

The statement was said to have upset Cissy Houston, who then reportedly uninvited Franklin to the service. Franklin's spokeswoman denied the story, citing leg spasms as the reason for her absence.

Sources and reviews noted that the soul diva seemed fine on Saturday night when she performed the second of two sold-out concerts at Radio City Music Hall, and insiders told NY Daily News that Franklin was feeling well enough to entertain 40 of her friends at the Ritz Carlton after Saturday's show.

Meanwhile, new reports about Houston's daughter, Bobbi Kristina, say she was so upset she almost didn't make it to her mother's burial on Sunday -- and while Cissy disagrees, the 18-year-old's dad, Bobby Brown, believes his daughter should be in treatment.

A family friend revealed to "Extra," "I think [Bobbi Kristina] has the chance to be around her cousins, to be around Cissy more because now her mother is not there."

Whitney Houston, who struggled with substance abuse for the last few decades, died on February 11, 2012 from reportedly mixing prescription drug Xanax with alcohol.Her body was found in a bathtub at the Beverly Hilton. Whitney was 48.

1980s actor Corey Haim battled his addiction to drugs and alcohol since he was 15.The Canadian-born star, who rose to fame in such films as "Lucas," "Murphy's Romance," and "The Lost Boys," died of pneumonia on March 10, 2010.Shortly before his death, Haim obtained 195 Valum, 149 Vicodin, 194 Soma and 15 Xanax, according to The Telegraph. He was 38.

Perhaps the most well-known celebrity drug death is Michael Jackson's -- who died on June 25, 2009 from acute propofol and benzodiazepine intoxication.Jackson's death was ruled as a homicide, and as a result, his personal physician, Dr. Conrad Murray was sentenced to 4 years for involuntary man slaughter.Jackson was 50 years old.

Actress Brittany Murphy collapsed in the bathroom after going into cardiac arrest in 2009.Her shocking death, which was primarily caused by pneumonia, iron-deficiency anemia and drug intoxication. Murphy had been taking some over-the-counter and prescription medication, including hydrocodone, acetaminophen and L-methamphetamine.She was 32.

Heath Ledger, who had just finished filming "The Dark Knight," died from an accidental "toxic combination of prescription drugs" on January 22, 2008.The actor was found dead in his NYC apartment. He was 28.

Dana Plato, who was best-known for her role as Kimberly Drummond in the '80s sitcom "Diff'rent Strokes," died in 1999 after taking painkiller Lortab along with Soma.Plato died on Mother's Day, May 8, 1999. She was 34.

Elvis Presley lost his battle against drugs and alcohol and died on August 16, 1977. Presley, who is simply known as "The King," was scheduled to fly to Memphis to begin a tour.He was found on his bathroom floor and was unresponsive. One of his lab reports said Elvis had "14 drugs in his system." Presley's long term use of drugs caused his death, with forensic historian Michael Baden saying, "Elvis had had an enlarged heart for a long time. That, together with his drug habit, cause his death."Presley was 42.

Judy Garland, remembered for playing the bright-eyed Dorothy in "The Wizard of Oz," died on June 22, 1969 from an "incautious self-overdosage" of barbituates. Her death was ruled "accidental."She was 47.

Screen goddess Marilyn Monroe was found dead in her Brentwood home on August 5, 1962 from "acute barbiturate poisoning," resulting from a "probable suicide."The actress, who remains a pop culture phenomenon, was 36.