Monday night's "Dancing with the Stars" was nearly overshadowed by Cher's superstar presence in the audience. Chaz Bono's mom sat front and center and was in tears after Chaz's Rocky-themed performance.

"Extra's" Renee Bargh was backstage to chat with Bono -- who said, "My mom was more nervous than I was." Renee read a tweet that Cher had written, saying, "I wasn't expecting to be so nervous... broke my bracelet clapping. I'm so proud, Chaz was great!" 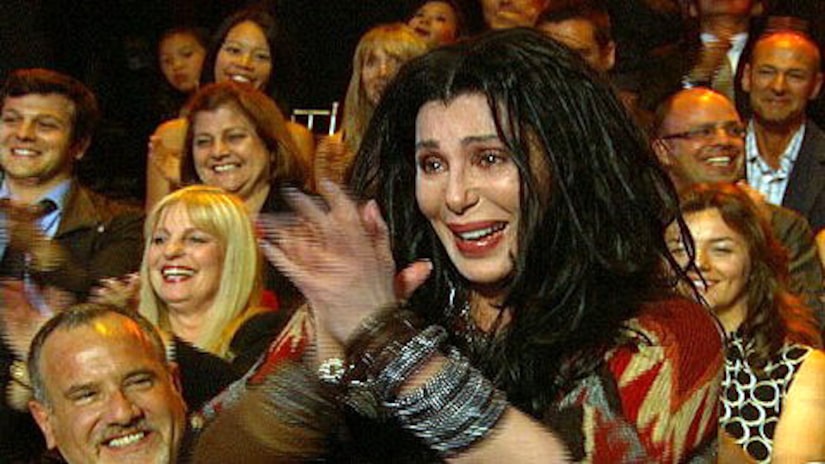 A smiling Chaz replied, "Aw, that's so awesome!" Having his famous parent in the audience must've helped, as the 42-year-old transgender activist earned his best scores yet.

Cher also tweeted on Monday, "I know there r people who will never c how wonderful u r, but last nite i cried from pure 'joy'! U gave everything youre already a winner!"

This wasn't the first time Cher proudly supported her kids' endeavors. The songstress also expressed her joy in seeing her other son, Elijah Blue Allman, in the music scene. Check out "Extra's" flashback footage of the happy mom, excited about Elijah's success with his band Deadsy. "I think he's good. I'm proud of all of them [and] I support the band one hundred percent."

In other "Dancing" news, Ricki Lake spoke too soon when she said, "I wanna quit!" during rehearsals. Lake and partner Derek Hough proudly came out on top, scoring the first 10s of the season with their psycho-themed dance. Hough admitted, "I was a little on the edge, I was like, 'Is that too much?' I don't know!"

Forgetting some of her moves, Chynna Phillips, said, "It's pretty difficult to get back into the dance once you've lost where you are."

Although there were no wardrobe mishaps this week, an injured Nancy Grace tore her hamstring. "When I did the splits in practice, I pulled it," Grace explained. Nancy received the second lowest score of 21, with Carson Kressley, whose pirate dance landed him at the bottom, with 20 points.

Watch the "Dancing with the Stars" contestants after dark!

Watch tonight's "DWTS" on ABC to see who will be sent home!