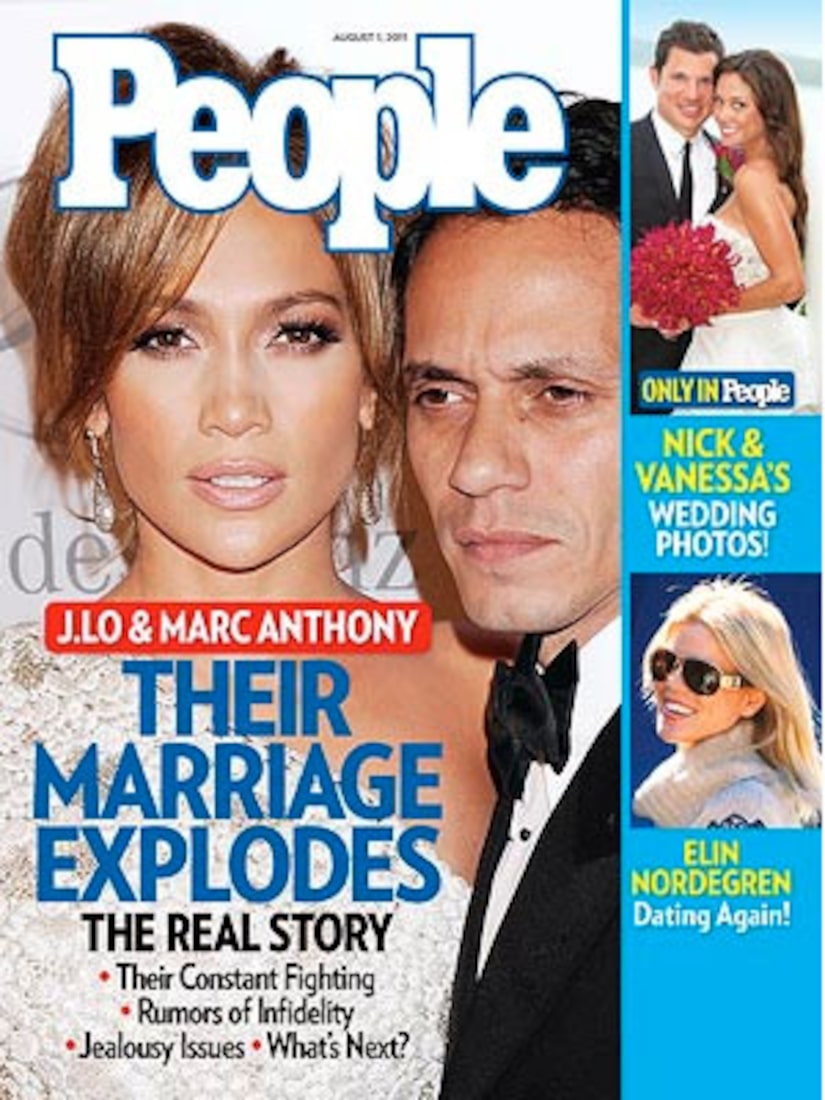 Ending their seven-year marriage was a decision that came "after months of non-stop arguing," a source close to Jennifer Lopez and Marc Anthony revealed to People. The bickering was sparked by issues on a movie set, jealousy on the "American Idol" stage, and Lopez's suspicion of Marc's infidelity.

An insider close to Anthony says the cheating accusations are not true, and believes the 42-year-old singer always supported his wife's career. "They started to see things differently," the source said, adding, "Though they love, admire and respect each other very much, they just needed to be apart."

J.Lo Through the Years

When the couple announced their separation on Friday, they also revealed they had "come to an amicable conclusion on all matters," prompting many to believe their decision was reached some time ago.

Meanwhile, J.Lo has escaped the media madness surrounding her breakup and is currently in the Ukraine, where she will perform at a billionaire's wedding for a million-dollar paycheck.

The Stars and their Kids!

Jennifer Lopez carried her 3-year-old Emme at the park in Paris. The singer was in town promoting her latest album, "Love?"

Pete Wentz spent the day with his son, Bronx, in Sherman Oaks, Calif. Pete stopped by for an ice-coffee before heading to the park for a play date.

Nicolas Cage, his wife Alice, and their son Kal-El (named after Superman's birth name) arrived to Denmark together.

Nicole Kidman smiled as she arrived to Sydney with her beautiful daughters Sunday Rose and baby Faith Margaret.

Hot mom and former Spice Girl, Geri Halliwell and daughter Bluebell Madonna hung out on a yacht together.

Father of eight, Rod Stewart, spent some time with his 5-year-old son Alastair in Paris.

Actress Naomi Watts arrives to her NYC home with her son Samuel Kai.

Heidi Klum and husband Seal took their daughter Leni to a toy shop in Brentwood.

Mark Wahlberg and his adorable son Michael were out shopping in L.A.

Alanis Morissette and Ever Imire

Seal and his son Samuel headed to karate class together.

Jennifer Garner took her girls on a healthy outing to the Underwood Family Farms in Moorpark. The trio picked veggies with some family friends.

Singer and new judge on "The Voice" Christina Aguilera carried her 3-year-old son Max after arriving to LAX.

Singer, designer, and mother Gwen Stefani took her kids Kingston, 4, and Zuma, 2, to a birthday party at Kidnastics in L.A.

Kingston plays around on the grass after lunching at Taco Surf.

Sarah Jessica Parker and Her Twins

Nicole Richie and Joel Madden were out in Beverly Hills with their children Harlow Winter Kate, 3, and Sparrow James Midnight, 2.

Daddy's little girl, Honor, played on the swings at the park with her dad, Cash Warren. Honor, 2, will be a big sister in the near future!

Jennifer Garner and daughter Violet ran errands in L.A. together.

Minnie Driver and two-year-old son, Henry Story, headed to a Malibu playground together.

Rebecca Gayheart and daughter Billie headed out in L.A. together to run errands.