Nominations were announced this morning for the 68th Annual Golden Globe Awards -- and we've got the stars' reactions to being recognized by the Hollywood Foreign Press Association. 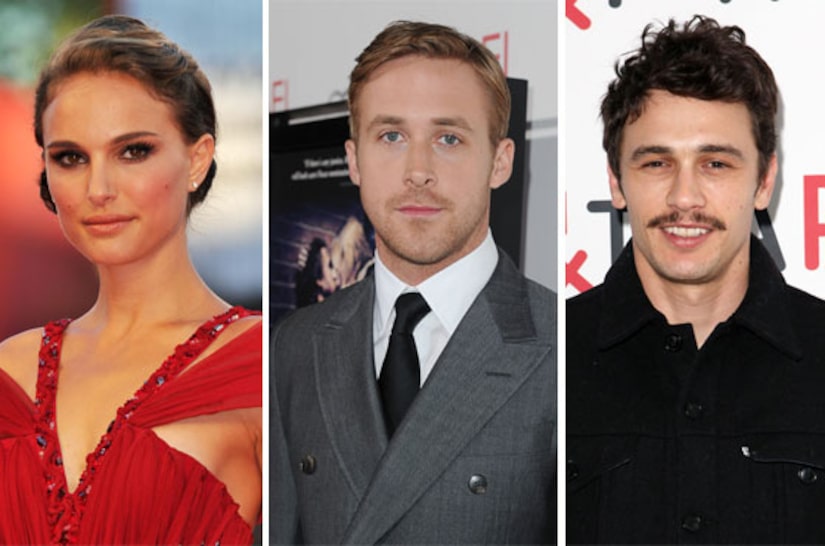 Ryan Gosling, Best Actor in a Motion Picture Drama nominee for "Blue Valentine," said, "I am very grateful to the HFPA. I also would like to thank them for acknowledging Michelle Williams for her incredible performance. Without the 12 years of director Derek Cianfrance's unwavering vision and commitment none of this would have been possible. I share this nomination with both of them."

Natalie Portman, Best Actress in a Motion Picture Drama nominee for "Black Swan," was honored. "I'm very honored by the HFPA nomination, and to be included in this group of actresses I so admire. The experience of filming "Black Swan" with Darren Aronofsky and our incredible crew is already the most fulfilling experience of my career. The audience appreciation of the film is only furthering how grateful and proud I am to be part of the film."

James Franco, Best Actor in a Motion Picture Drama nominee for "127 Hours," couldn't be more proud of the film. "I'm especially grateful to the HFPA for this honor and I'm excited to see "127 Hours" being recognized this awards season. I'm happy for Danny Boyle and his team and our DP's Quique and Anthony who were there with me down in the canyon! I am so proud of the film and that Aron Ralston's story has been well received!"

Amy Adams, Best Supporting Actress in a Motion Picture for "The Fighter," saluted her co-stars. "What an exciting morning for our film, especially when you consider what a terrific year it was for movies. Thank you Hollywood Foreign Press Association for this honor and also for recognizing Mark, Melissa, Christian and David's great work. I am deeply proud of the film and to be honored for it is icing on the cake."

Claire Danes, Best Actress in a Mini-Series or Motion Picture Made for Television nominee for "Temple Grandin," feels privileged. "I am honored to be recognized by the Hollywood Foreign Press Association. "Temple Grandin" is an extraordinary, revolutionary and inspiring woman. I feel deeply privileged to have been chosen to tell her story."

Colin Firth, Best Actor in a Motion Picture Drama nominee for "The King's Speech," said, "I'm truly grateful to be recognized by the Hollywood Foreign press for this film, and euphoric to be in the company of so many of my colleagues."

Annette Bening, Best Actress in a Musical/Comedy nominee for "The Kids Are All Right," praised her co-star. "Seeing our movie getting so much recognition makes me proud. And being nominated alongside Julianne Moore is the best!" Moore herself added, "I was busy putting towels in the dryer this morning and didn't hear my phone ring, so when my friend called a little later I was pretty sure she was consoling me. I am so thrilled to be nominated!"

Said Jeremy Renner, Best Supporting Actor in a Motion Picture nominee for "The Town," "I raise a cup of coffee, grinning from ear to ear at this very early hour, to the HFPA with gratitude as this represents an enormous milestone for me personally as an artist and I will be forever indebted to Ben Affleck my partner in crime."

"One nomination would of course be a great honor, but two, is simply astonishing. I am floored, truly, by the HFPA's kindness and generosity. I wish to thank them dearly, as well as all those many wonderful souls who made the films in question possible. My deepest gratitude and respect goes out to you all," marveled Johnny Depp on his two nominations for Best Actor in a Comedy or Musical in "Alice in Wonderland" and "The Tourist."

Claire Dane was "honored" for her nomination as Best Actress in a Mini-Series for her turn in HBO's "Temple Grandin," saying, "Temple Grandin is an extraordinary, revolutionary and inspiring woman. I feel deeply privileged to have been chosen to tell her story."

Young newcomer Jennifer Lawrence, nominated for Best Actress in a Drama for "Winter's Bone," is on set in Georgia filming "X-Men," but gave her heartfelt thanks. "Working on 'Winter's Bone' with such talented people was an incredible experience, and never did I dream that it would lead to this moment. I'm so proud of this movie and words can't describe being in the company of these extraordinary actresses. 'Thank you,' is the best I can do right now."

"Extra" was also on hand to congratulate actor Jake Gyllenhaal for his Best Actor in a Comedy or Musical nomination for his turn in "Love and Other Drugs." Watch his reaction!