So far, so good for beleaguered golf champ Tiger Woods, who looked relaxed and confident as he opened with his best first round ever at the Masters, just a few shots behind leader Fred Couples. 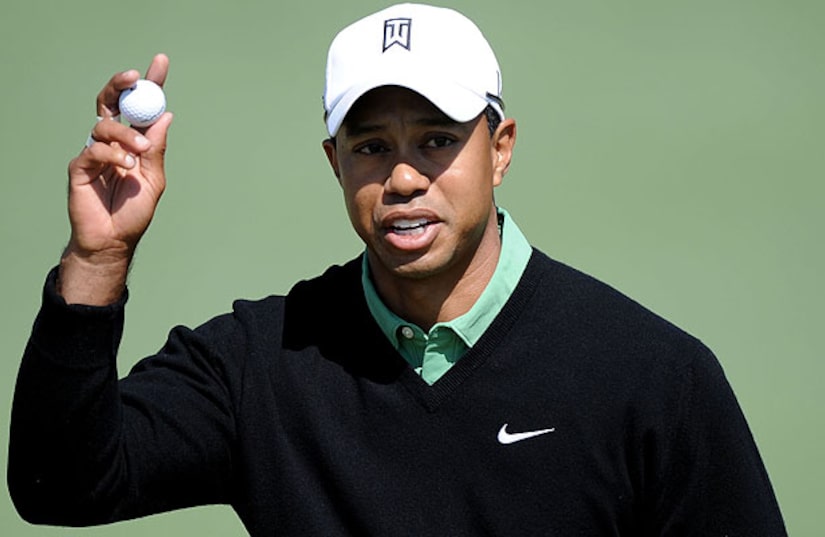 "I felt normal," the golfer told reporters at the end of day. "Tried to hit a little fade off the first tee, tried take something off of it and make sure I got in play. From there, I just went about my business."

Some of that "business" included displaying his enthusiasm -- and his infamous temper -- even though he vowed to stay on an even keel through the tournament. He twirled his club or fist-pumped when he made a good shot, or slammed the club into the ground when he didn't. He even sank to his knees when he missed one putt.

The turmoil surrounding his sex scandal didn't let up, either. A small plane flew over the course, pulling a banner that said, "Tiger: Did You Mean Bootyism?" -- referring to the athlete's statements about returning to his Buddhist faith, and later "Sex Addict? Yeah Right Dude, Me Too."

Woods also defends his controversial Nike ad -- which ran throughout the Masters broadcast -- in which he silently looks at the camera while his father talks to him. "I think that's what my dad would say... I think any son who has lost a father and meant so much in life would understand the spot."

The controversy was good for TV ratings, which were up by 50 percent from last year's opening day.

Meanwhile, Woods' estranged wife, Elin, is reportedly pretty peeved. "She thinks he's breaking his promise to her by returning to golf so soon. And as every day goes by, she gets a little angrier," a source tells RadarOnline.