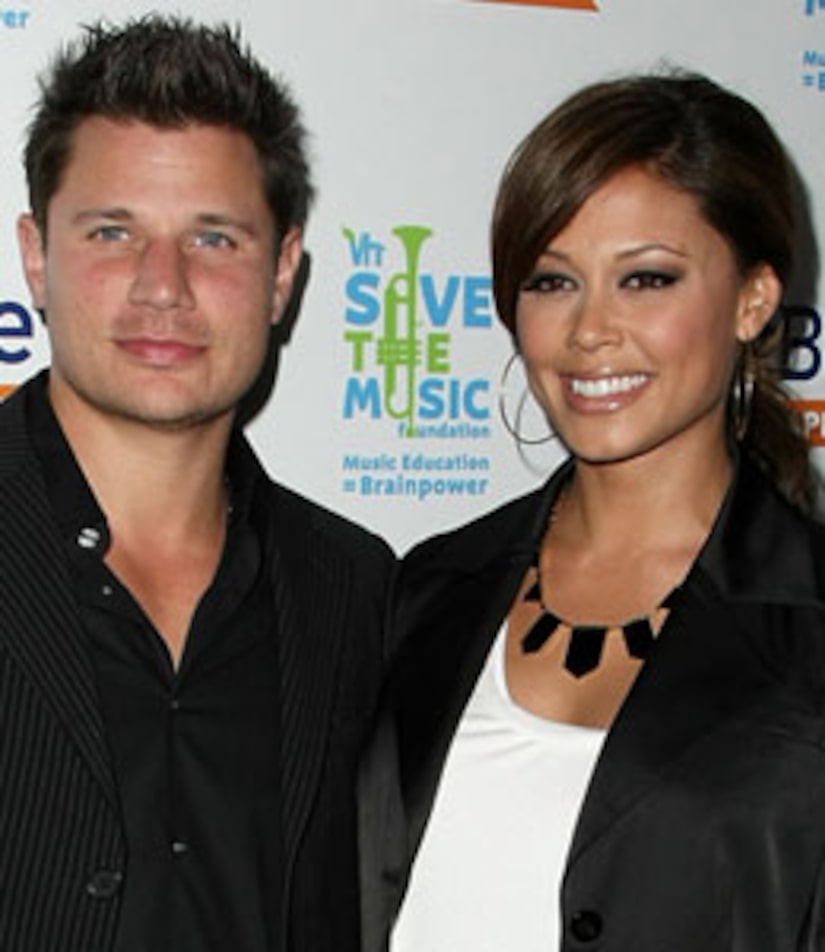 Nick Lachey and Vanessa Minnillo have rekindled their love!

"I am happy in a relationship," said Nick on Thursday on "Good Day Philadelphia." "I was single for a minute there, and then we've kind of patched things up."

After dating for almost three years, the couple called it quits in June and announced that they've remained "good friends."

Spears filed for divorce from her 2-year marriage to K-Fed, citing "irreconcilable differences." The pair have two kids, Sean Preston and Jayden James. Britney said, "I think I married for the wrong reasons. Instead of following my heart and doing something that made me really happy, I just did it for the idea of everything."

Megan has called off her engagement with Brian Austin Green. She confirmed the split in Berlin, where she was promoting "Transformers: Revenge of the Fallen," saying, "I'm currently what you would call single, I guess."

The pair called it quits in November 2006 after nearly two-and-a-half years together. He went on to have two kids with Nicole Richie.

Carmen and Dave announced in July 2006 that they were amicably separating after less than three years of marriage.

The couple split in in November 2006 after just four months of marriage. The couple hosted a lavish ceremony aboard a glamorous yacht in St. Tropez. Pam called it the "the best most romantic wedding of all time."

The pair who played a couple on "The O.C." ended their three-year romance in December 2006.

After two years of dating and talk of a potential marriage, Kim and Reggie called it quits in July 2009. Now they're back on... supposedly.

"Yes, it's true," Camilla's rep said. "Joe and Camilla have broken up. There is no third party involved and they care deeply about each other and will remain friends."

The couple who seemed to have a lasting marriage filed for divorce in 2006 after seven years of marriage.

Nick and Jess had a reality TV show, "Newlyweds." It was all over in November 2005.

After ten years of marriage, Jon and Kate Gosselin have called it quits. Fans learned about the breakup during the "major announcement" on the June 22nd episode of their TLC reality show, "Jon & Kate Plus 8."

Lindsay Lohan and Samantha Ronson were known for their stormy, on-and-off relationship. Lindsay twittered, "So-you win, you broke my heart. now go away. i loved you." She then told E! News, "We are taking a brief break so I can focus on myself."

John Mayer and Jennifer Aniston broke up in March 2009 after she returned home from a European tour to promote her movie, "Marley & Me." Jen told a British magazine, "Who ever said that every relationship has to last forever? That's hoping too much."

Former "Girl Next Door" Holly Madison and her illusionist BF Criss Angel called off their relationship in February 2009.

Katy and BF Travis McCoy of the band Gym Class Heroes sang their swan song in January 2009 after a year together. "It's sad, but they were fighting a lot because they never saw each other and now she is going on tour," an insider told UsMagazine.com.

A source said that Hayden, 19, "is young. She likes to go out in the Hollywood scene and that's not his style." Milo, 31, "has been concentrating on work on his production company."

The laughs ended for Jimmy Kimmel and Sarah Silverman in July 2008. Right after their split, Jimmy went on "The View." When Barbara Walters asked if they'd ever be on-again, he said, "I don't know. Ask her."

The pair ended their relationship in August 2006. Viewers watched their dynamic on MTV's "Meet the Barkers," which premiered in April 2005. They briefly reconciled after Travis' plane crash.

Richie and Heather split in February 2006 after 11 years of marriage. According to the divorce petition, the couple signed a prenup to determine how their assets would be divided.

Justin and Britney abruptly ended their 3-year relationship in March 2002. Although both parties refused to discuss the reason behind the split, Timberlake's hit song 'Cry Me a River' featured a Spears lookalike and lyrics about a cheating girlfriend.

Whitney and Bobby split in 2006 after a 14-year marriage.

After ending their relationship in 2000, Carson said when Jennifer split with him after a year-long romance, he got the news from the radio. "I woke up to Howard Stern telling me my relationship with [Jennifer] was over," says Daly. "Then I heard Steve Kmetko on E! say, 'Just off the Associated Press: Jennifer Love Hewitt and Carson Daly have officially broken up.' "

Von Teese filed for divorce from Manson in December 2007 after a year of marriage.

Jen and Ben, affectionately known as Bennifer split in 2004. The 18-month relationship had begun unraveling when Jennifer had enough with Affleck's behavior, which reportedly included a notorious visit to a Vancouver strip club and frequent visits to casinos.

Britney and Ashton started dating in October 2002 and ended the six-month relationship in April 2004. They met on the movie set of "Just Married."

Ryan and Rachel met on the movie "The Notebook" in 2005. Ryan announced in the Nov. 2007 issue of GQ that he and Rachel had broken up.

Justin and Cameron met at the Nickelodeon Kids' Choice Awards in 2003. They ended their three-year relationship in 2006.

Pop Star Mandy Moore and tennis sensation Andy Roddick called it quits after almost two years together. They ended their relationship in March 2004.

Rebecca and John started dating in 1994. The two met at a Victoria's Secret fashion show where she was a model. They married in the summer of 1998 and divorced in 2005.

Actress Angelina Jolie filed for divorce from husband Billy Bob Thornton in 2002. She cited "irreconcilable differences" and requested full custody of the couple's 11-month-old son, Maddox, whom they adopted from Cambodia. The two met on the set of the 1999 movie "Pushing Tin."

Bruce and Demi ended their 13-year marriage. The divorce papers were filed at a courthouse near Sun Valley, Idaho, where they had shared a multi-million-dollar estate. They have three children -- Rumer Glenn, Scout Larue and Tallulah Belle.

Wilson and Hudson,who starred together in 2006's "You, Me and Dupree." They ended their on/off relationship in 2009.