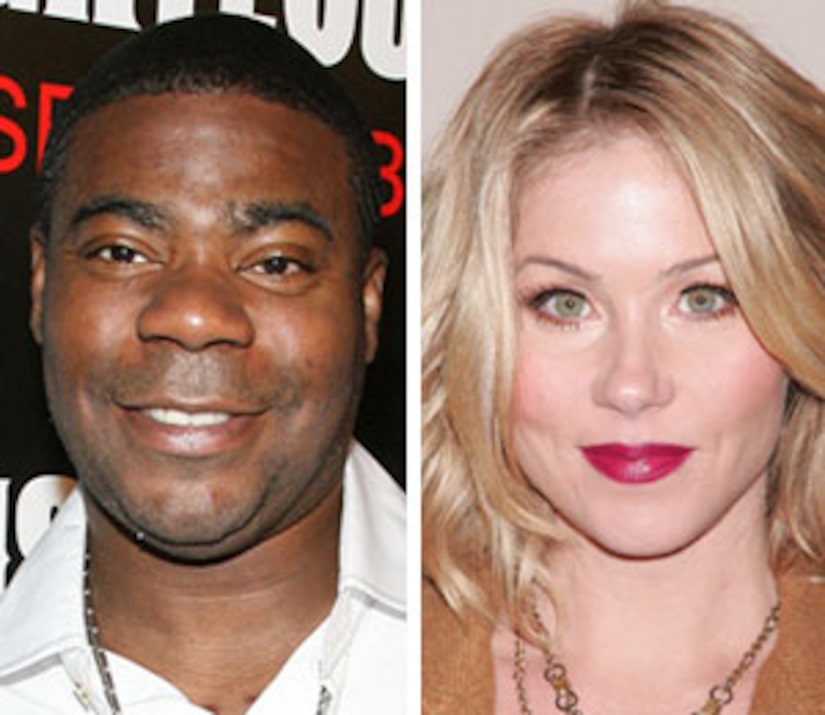 "Extra" has the reactions from the talented nominees for 2009 Primetime Emmys. Check out what the actors and actresses had to say about their nods!

"30 Rock" leads the pack with 22 nominations, and star Jane Krakowski is nominated for Outstanding Supporting Actress in a Comedy Series. The funny star says, "The writers have created an amazing character in Jenna which I just love to play. I'm so honored to be part of this ensemble, this is my first Emmy nomination, I'm so excited! I am blown away by the number of nominations the show has received and thrilled for everyone."

Fellow "30 Rock" star and first-time nominee Tracy Morgan says, "It is an honor to be recognized by my peers and be a part of '30 Rock's' 22 nominations. I want to thank everyone from Tina to Lorne to everyone in craft services."

Jack McBrayer plays the lovable page Kenneth Parcell on the NBC comedy. He states, "I am thrilled to be riding some very nice coattails right now. We are all floored that the show is getting so much recognition. I blame Tina Fey."

Alec Baldwin and his knee-slapping one-liners earned him the Outstanding Lead Actor nod for his role as Jack Donaghy on "30 Rock." He says, "I'm thrilled for everyone connected to the show, but I'm especially excited for Jane, Jack and Tracy. It's great working with the entire group and I'm grateful for the recognition of our work."

Christina Applegate was nominated for Outstanding Lead Actress in a Comedy Series for the now cancelled ABC show. Applegate says, "This year's nomination means more to me than ever before. I'm incredibly happy and honored. Certainly it's bittersweet -- we no longer get to do the show that we love so much, but that doesn't take away from the excitement and honor of this nomination. This is a wonderful recognition of what we created together every week."

Silly "The Office" star Rainn Wilson is proud to be nominated and jokingly say, "I am supremely honored to be nominated for an Emmy for the third time. They say good things come in threes, like comets, omens and Jonas Brothers. God bless these United States of America."

"My Life on the D-List's" Kathy Griffin has won two Primetime Emmys and is thrilled to be recognized again, with two nominations! The comedienne says, "I know this industry isn't supposed to be about awards, but screw you and the horse you rode in on... Seriously, I am truly honored that the Academy has recognized my special and 'My life on the D-list,' specifically the episode where I was privileged enough to visit and perform at the Walter Reed Army Medical Center. Shout out to my one-legged GIs."

Amy Poehler left "Saturday Night Live" on maternity leave before the end of the season, but her work was not forgotten. Poehler was nominated for her various characters on the late-night show. She says, "I am super pumped for some high octane heart thumping hardcore Emmy action!"

Neil Patrick Harris will play two roles on Emmy night -- nominee and host. NHP is beyond excited for the big night. He states, "I love being in the mix again this year, but am absolutely over the moon about 'HIMYM's' Best Comedy Series nomination. The only multi-camera show in the mix! This kind of recognition is huge for us. Just huge. It should be quite the night. Being asked to host the show -- terrific. Getting a third nomination -- fantastic. Having the ability to scribble my name in the envelope backstage when no one is looking -- priceless."

Mariska Hargitay, up for Outstanding Actress in a Drama Series for "Law and Order: SVU" says, "I'm hugely grateful to be nominated, and ridiculously honored to stand in the company of these incredible artists."

"Weeds" actress Mary-Louise Parker is ecstatic about the Showtime series' 5 nominations, saying, "I feel proud to be a part of this show and to work with an incredible group of creative minds who take chances and are being acknowledged for this today."