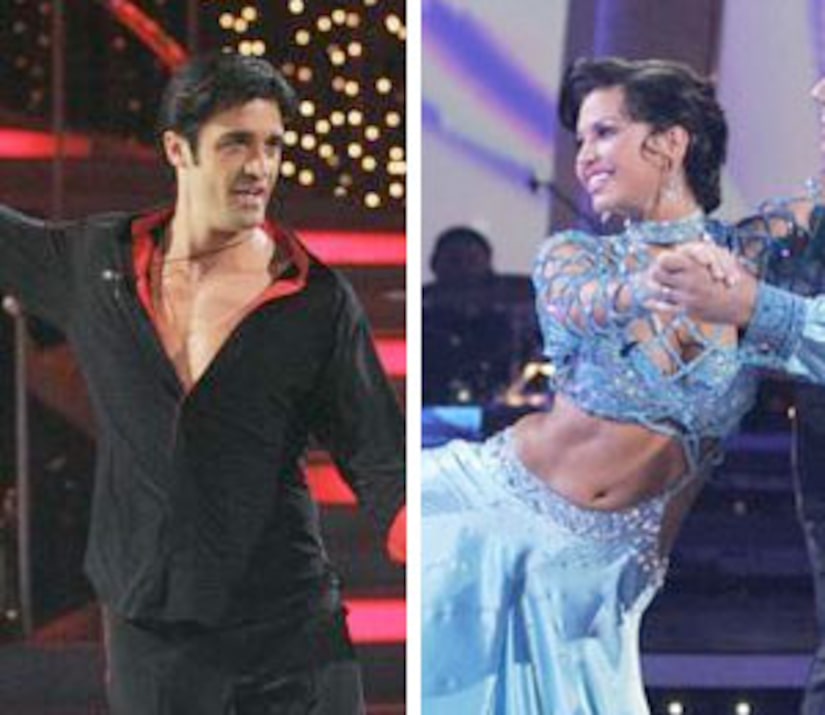 The new celebs are competing for the mirrored ball trophy! "Dancing with the Stars" is back and season 8 has already proven to be full of surprises!

Playboy pinup Holly Madison and "The Bachelor" reject Melissa Rycroft joined the cast as last-minute replacements. Holly stepped-in for Jewel after she fractured her tibia. The blonde babe had only a few days to rehearse with partner Dimitri Chaplin. Melissa signed on last Friday after Nancy O'Dell pulled out with a torn meniscus.

"Sex and the City" star Gilles Marini pulled his Achilles tendon during rehearsals in February, but the audience never would have known! He and partner Cheryl Burke sexed up the family friendly show with a racy cha cha cha, leaving judge Bruno Tonioli impressed. "Clothes on or clothes off, you certainly know how to strut your stuff," said a bubbly Bruno. The couple earned the night's top score of 24.

Olympic Gold medalist Shawn Johnson, 17, is the youngest competitor and small in stature, but she proved her gymnastics background was a big help when it came to waltzing with partner Mark Ballas. Judge Carrie Ann Inaba told the couple she was "truly moved." Shawn and Mark's total score was a 23. "Go-Go" Belinda Carlisle delivered a sturdy but lackluster dance yielding low marks, while "Jackass" star Steve-O may be this season's clown prince. Rapper Lil Kim dedicated her dance to her former fellow prisoners, while Apple Co-Founder Steve Wozniak delivered an awkward performance that left him compared to a Teletubby.

Fresh off her breakup with "The Bachelor," Melissa Rycroft sparkled her way onto the dance floor in a dazzlingly revealing costume. The former Dallas Cowboys cheerleader and partner Tony Dovolani waltzed away with a score of 23. Judge Bruno Tonioli confessed, "You are a revelation! It was like watching a beautiful bird about to take flight."