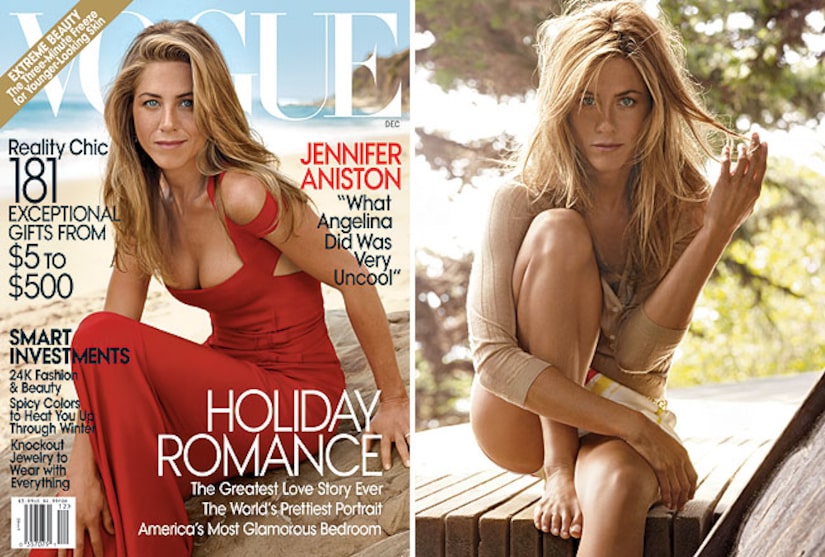 "We have exchanged a few very kind hellos and wishing-you-wells and sending you love and congratulations on your babies," Jennifer reveals in the December issue of Vogue magazine. "I have nothing but absolute admiration for him and I'm proud of him! I think he's really done some amazing things!"

The actress -- who referred to Angelina's recount of falling in love with Brad "uncool" -- also announced that she plans to have a family of her own one day. "I've said it so many times: I'm going to have children. I just know it."

After her divorce, Aniston became close to "The Break Up" co-star Vince Vaughn -- who provided Jen the escape she needed from her life. "I call Vince my defibrillator," she warmly said. "He literally brought me back to life. My first gasp of air was a big laugh! It was great. I love him. He's a bull in a china shop. He was lovely and fun and perfect for the time we had together -- and I needed that. And it sort of ran its course."

Most recently, Jen enjoyed a romance with singer John Mayer that ended in August. Shortly after, Mayer ran his mouth to a group of paparazzi about their split -- a move that Aniston blames on his inexperience. "He had to put that out there that he broke up with me -- and especially because it's me. It's not just some girl he's dating."

She continues, "I get it. We're human. But I feel seriously protective of him and us. Trust me, you'll never see that happen again from that man -- and it doesn't take away from the fact that he is a wonderful guy. There was no malicious intent. I deeply, deeply care about him; we talk, we adore one another. And that's where it is."