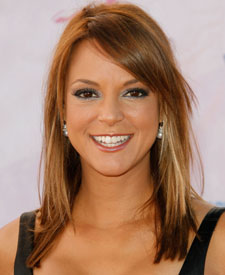 "CSI: Miami" star Eva La Rue is ready to say "I do" once again. She and longtime beau Joe Cappuccio have announced their engagement, reports the Sunday Times.

La Rue said that she was shocked when her businessman boyfriend got down on one knee in Zimbabwe. "I was driven to tears and totally speechless as he placed the four-carat ring on my finger," said the stunning actress, who recently completed filming "The Lakeview Terrace" with actor Samuel L. Jackson.

The couple plan to return to South Africa next year to tie the knot, as Eva explains the place now holds "a special place" in her heart. Her fiancé, Cappuccio, is fond of the country -- he owns a multinational fishery, Del Mar Seafoods in Los Angeles, and supplies the local company, Lucky Star.

This will be La Rue's third trip down the aisle; she was previously married to "All My Children" star John Callahan, and actor/TV host John O'Hurley.