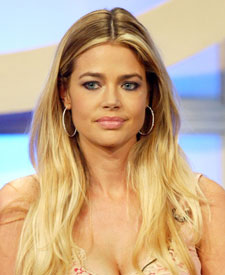 Denise Richards is in the "Extra" hot seat -- on Hollywood's nastiest "he said, she said" war of words! The actress has opened up her life by promoting her controversial E! reality show, "It's Complicated." Now, she's defending her decision to put her kids in front of the camera -- a decision her ex Charlie Sheen fought in court and in the media.

Denise insists she's doing the show because she's a single mother. "I'll be honest with you -- I need work," said Richards, "I need to support my children. I have bills like anyone else." Denise could make nearly a half-million dollars from her new show! "Extra" also uncovered recent reports showing the actress is pulling in more than $40 million for less than three years of marriage -- which includes a $7 million divorce settlement, $20 million in syndication royalties from Sheen's "Two and a Half Men" TV show, and nearly $10 million in tax-free child support over the next 15 years.

Although the actress says, "I'm a good mom -- I don't want nannies raising my kids," Richards has two nannies for the girls, plus one full-time assistant, one full-time pet caretaker, and one full-time live-in housekeeper!

Last November Sheen told Extra, "She continues to reveal what type of person and parent she is through her behavior." Today, Sheen is choosing not to comment any further on this matter.

Denise also talks about the e-mail making news everywhere, which she allegedly sent to Charlie's fiancée Brooke Mueller, asking for another baby from Charlie. The email reads in part, "I was strictly looking for a sperm donor if it's any of your business. This wasn't to have sex with him, it was him donating." Denise claims the e-mail is doctored, telling Extra "This is garbage... this is not an e-mail I sent to anyone - period." Charlie plans to have a computer DNA expert analyze the e-mail to prove no part of it has been altered