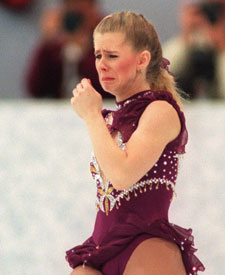 It's Tonya Harding -- in tears. The fallen figure skater broke down in an exclusive interview with "Extra" while promoting her tell-all book, "The Tonya Tapes." It's been 14 years since the attack on competitor Nancy Kerrigan that rocked the Olympics. Now, Harding is coming forward with bombshell claims of rape and abuse at the hands of the people closest to her -- including her own mother -- and Tonya's ex husband, Jeff Gillooly, who went to prison for the knee attack on Kerrigan.

"My mother abused me as a child -- physically and mentally," said Harding, "then later on my ex-husband sexually and emotionally abused me." Both Tonya's mother and ex, who now goes by the name Jeff Stone, have denied Tonya's claims of abuse. Harding hopes her story will help others.

"If you've been abused in any way, it's not your fault," the former ice queen said, "if you feel shameful by telling someone about it, you're not." Tonya, now 37, is finally closing the book on her hard times -- and hoping to become an inspiration to others.