"American Idol" is feeling some heat after all-time low ratings -- and now "Extra" has the exclusive reactions from every "Idol" insider on the rumors that America's #1 show is getting a makeover next season! 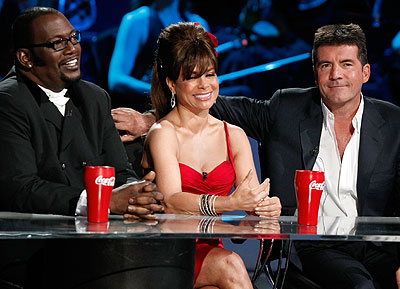 "We've suffered from the lack of personality because [the contestants] don't say anything," Simon said to "Extra," "people want to see emotion!" While this season's singers may have lacked emotion, judges Simon and Randy encourage viewers not to rush to judgment. "It's like the whole country's watching this show," says Cowell, "so I actually don't trust the system." Jackson agrees, saying "The last I checked, there's still more viewers than any show on TV -- it's all good, baby."

It's all good for the superstar show, but what about for their partner in judging, Paula Abdul? Tabloids are swirling with rumors that judge nice may be getting the "Idol" ax -- but host Ryan Seacrest nixed the speculation, confirming that Abdul isn't going anywhere!

Tonight, the biggest change on "Idol" will be for the contestant getting the boot. Watch as three become two -- tonight on FOX!