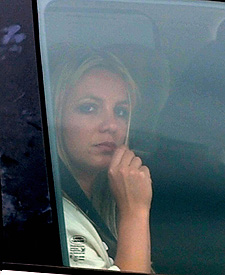 From pop princess to pop wreck and back, and now Britney's in a wreck. It's another fender bender for the "Toxic" star, who hit a red Ford Explorer being driven by a female driver on Sunset Blvd., reports TMZ.

Allegedly, Spears didn't leave the car, but her bodyguard got out to exchange words with the other driver. Afterward, the unidentified driver followed Britney home.

Spears was stopped at a red light when she accelerated and bumped the car in front of her -- there was no visible damage, and no injuries reported. Spears hit a parked car in Studio City last year while trying to park.