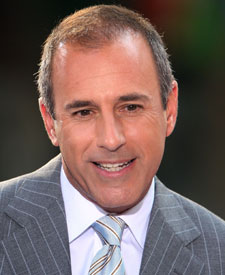 The war of words between Barbara Walters and Star Jones was the hot topic at a party for Time magazine's 100 Most Influential last night in New York -- but when "Extra" caught up with Matt Lauer, he opened up about his own former feud -- with Tom Cruise!

Recalling the heated discussion on "Today" in 2005 -- in which Cruise called Lauer "glib" -- Matt told "Extra" about the possibility of a reunion with the "Lions for Lambs" star. "It is an open invitation and we've had one for a long time," says Lauer, "Sooner or later we're going to have to walk into the same studio and I look forward to it."

The "Today" host also didn't shy away from the "View" controversy. "I love Barbara and she's been someone I've looked up to my entire career and she's been very kind. I don't know what's going to come out of all these exchanges [with Star] but I know one thing. It won't change my opinion of her [Walters]."