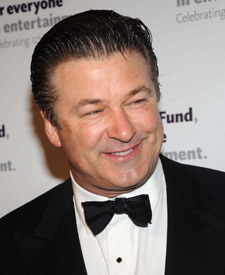 "30 Rock" star Alec Baldwin is ready to rock the vote - as a political candidate! The funnyman talked politics during a recent "60 Minutes" interview -- and shared his dream of becoming New York's governor! "There's no age limit on running for office, to a degree," says Baldwin, "it's something I might do one day."

Alec is welcoming to the public scrutiny that comes with public office. The 50-year-old star has already dealt with the media circus that surrounded the most infamous voicemail in Hollywood history - a rant directed at his daughter Ireland during a bitter custody battle with ex-wife Kim Basinger. Now, he's opening up about his regret over the incident -- and how he's rebuilding his relationship with the 12-year-old Ireland.

"There's only one thing that comes to mind, initially... how my daughter must have felt to have this played out in public," says Baldwin. "You can pretty much bet all you own that I would never leave another voicemail message for my daughter that wasn't just like something out of a Rogers and Hammerstein score."

On top of aspiring to public office, Alec is dishing about another dream -- to become the next Mike Wallace, as a "60 Minutes" correspondent! Catch "30 Rock's" Baldwin rock "60 Minutes" this Sunday on CBS.