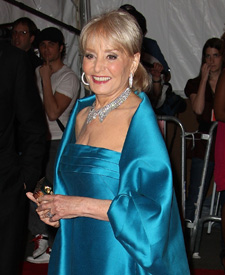 She became a TV legend by asking tough questions of everyone from the Dalai Lama to presidents, from world leaders to Hollywood stars -- now Barbara Walters is being grilled in the "Extra" hot seat!

Only in this "Extra" exclusive, Barbara is breaking news about a possible Rosie/Star reunion -- admitting that she'd happily have either ex-hostess back on "The View." "I don't know what the situation might be, but I could see having Star and Rosie on," says Walters, "not together perhaps." The queen of the interview opened up to "Extra" about everything -- including her affair with a married senator! "No, he's not the guy who got away," says Barbara.

Ms. Walters is promoting her hot new tell-all, "Audition" -- a dishy memoir so revealing that she now regrets writing it! "It may be too revealing, too personal," says the 78-year-old hostess, "When I read it I think, 'Why did I say that?' but I did and it's out and it's done."