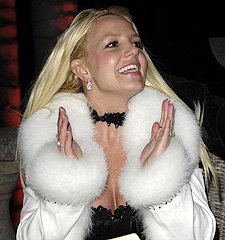 Britney Spears seemed determined to regain her title as wiggiest pop princess in town this weekend, by cruising through of Hollywood with a short brunette wig.

X17online.com spotted Ms. Spears driving a white Land Rover, alternating between blonde and brunette hairstyles. Is it possible Britney is getting into character for another TV appearance?

After her critically acclaimed role on "How I Met Your Mother," TV stations and Papa Spears are determined to get Brit more television spots in order to get her life and career back on track - thinking that perhaps a 9 to 5 might be good for her. No word yet on any upcoming Brit projects, but her frequent trips to rehearsal studios have fans saying, "Gimme more."