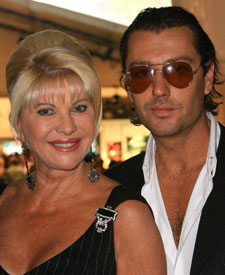 Most couples have pre-wedding spats, but Ivana Trump and fiancé Rossano Rubicondi must've really gone at it. The New York Post says the two got into a nasty fight on St. Patrick's Day that resulted in the cops being called. "There was a disturbance," a police spokeswoman told Page Six. "No one was arrested."

Sources tell the Post that the two, who have been dating for more than six years, are fighting over the prenuptial agreement. Ivana's ex, Donald Trump, reportedly had one of his lawyers draft the prenup and "will go nuts" if it isn't signed soon. The Donald still cares!

Ivana, 59, is set to wed Italian actor Rubicondi, 35, at Donald Trump's swanky Mar-a-Lago club in Florida in front of 550 guests. The Post says OK! magazine has already shelled out $1 million for the pics -- and guests have been instructed to hand over their cell phones and cameras. And to make sure the photos are perfect, all women must reportedly wear pastel gowns, and the men are to wear white.

Mackenzie Phillips: I Had Sex with My Father 9