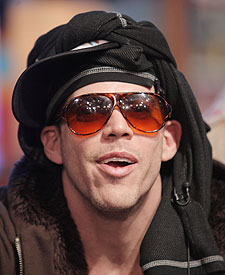 "Jackass" star Steve-O is being held in the mental ward of Cedars Sinai Medical Center after reportedly threatening to end his life, according to letters written to several friends about a broken romance, says Star magazine. He has also been charged with felony possession of cocaine stemming from his arrest on March 3 in a fight with neighbors. An insider told Star that the daredevil was taken to the emergency center on Sunday afternoon and placed on a 72-hour hold. That has since been extended to two weeks.

The tattooed, pot-smoking Steve-O (real name Stephen Glover) caused a scene outside the hospital, according to Star’s source, who said, "Steve started flipping out. He told doctors he wanted to hurt himself badly. He wanted to break every bone in his body one by one." The source also told the magazine that Steve is "stabilized on his meds at this point", adding, "He was also treated for burns on his skin as if he had been putting out cigarettes on his own body."

This isn’t the first crack-up for the frequently injured Steve-O. Early this month he was arrested in a dispute with neighbors, after which family and friends voiced concerns for the troubled daredevil, with one family member saying, "He doesn’t need jail, he needs therapy. We’re just really hoping that this will be the wake-up call that gets him back to himself."