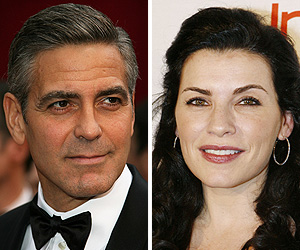 NBC is in the final stages of scripting the 15th season of the hospital mega-hit, "ER," and EW.com is reporting that executive producers are in talks to try and bring back some of the show’s hottest former stars, including George Clooney and Julianna Margulies.

"We want to revisit characters that have existed on the show over the years and say where they are now," says writer David Zabel, adding, "We’d love to get them [Doug and Carol] back in some way, but that doesn’t mean we’re going to. But we’re going to try."

Try they will, but in the meantime, "ER" alum Noah Wyle will be making a guest appearance, and Aida Turturro from "The Sopranos" will reportedly be back for a three-week stint as a patient.