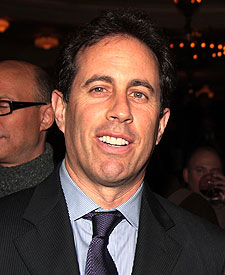 Is Jerry Seinfeld returning to TV with a brand new sitcom? That’s the red-hot rumor sparked by the New York Post, claiming Jerry was about to strike a deal for a new show! Get outta here! Right. Sorry, "Seinfeld" fans – "Extra’s" learned it simply isn’t true.

"There’s nothing to it," Jerry’s reps said in a statement. But could Jerry pull off another mega-hit someday? Well, no, but only because Jerry told "Extra" he’s "never" going back to the small screen and wouldn’t be able to recapture that "Seinfeld" magic. "How could I do it again and come anywhere close to that show?"