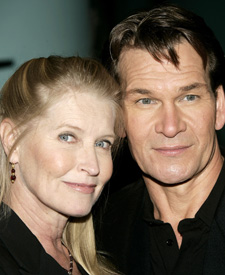 Patrick Swayze, 55, is bravely forging ahead with his projects, in the face of news of his pancreatic cancer. A&E announced that "The Beast," a pilot Patrick began shooting in December, is still under consideration as a series, according to Hollywood Reporter. A&E says the show, in which Patrick plays an unconventional FBI agent, could be "one of the new drama series on the network."

A rep for Swayze said that the star would continue his normal schedule, despite the diagnosis. If the series gets the green light, fans can expect to see Patrick on the small screen, and he’s also got a movie set for release later this year; "Powder Blue," starring Jessica Biel and Oscar winner Forest Whitaker.

His physician said he has a "very limited amount of disease and appears to be responding well to treatment." The National Cancer Institute estimates that pancreatic cancer takes nearly 35,000 lives a year in the U.S. -- and only five percent of patients survive beyond five years after diagnosis.