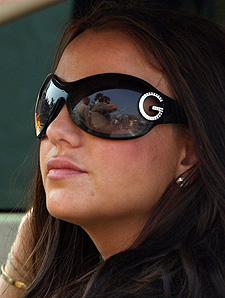 Britney Spears, wearing bright red boots and carrying a digital camera, walked into a Beverly Hills medical center yesterday, escorted by a nurse in scrubs. X17online.com reports that Brit’s dad was along for the exam. It's not clear why she was there, but X17 speculates it might have simply been a visit to a dermatologist – which in Britney’s world is an event.

Brit's doctor visit came just hours after another three-hour reunion with her sons. X17 snapped the starlet tenderly cradling the tots before handing them back to Kevin's bodyguards -- as grandma Lynne looked on.

Meanwhile, the pop star’s legal battles continue. London’s News of the World reports that she'll be the star witness in an upcoming hearing in which the man claiming to be her attorney, Jon Eardley, will try to overturn the restraining order against former manager, Sam Lutfi. Brit will supposedly present evidence against her own parents in the hearing. Eardley's spokesman is reportedly saying that Eardley will "shock the world" with "explosive evidence" in the case.