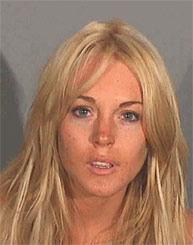 Lindsay Lohan has been arrested for DUI for the second time – barely a month after leaving rehab.

An official from the Santa Monica Police Department held a press conference this morning and revealed she was arrested after a brief chase at 2:15 a.m. this morning. For unknown reasons, she was chasing down the mother of her former assistant.

The woman being chased called police on Lindsay and tried to make it to the Santa Monica Police Department. Fearing for her safety, the woman pulled over in a parking lot near the police station, and Lindsay followed. Officers found Lindsay arguing with the woman in the parking lot and administered a field sobriety test.

She was arrested for DUI and hauled into jail at 4:23 a.m. During a pre-booking search, officers found a small amount of cocaine and she has now been charged with both DUI and possession of a controlled substance.

This is Lindsay's second DUI arrest in three months. She recently completed a 45-day stint in rehab, her second rehab stay in 2007.

Her court date has been set for August 24.

"Addiction is a terrible and vicious disease. Since Lindsay transitioned to outpatient care, she has been monitored on a scram bracelet and tested daily in order to support her sobriety.

Throughout this period, I have received timely and accurate reports from the testing companies. Unfortunately, late yesterday I was informed that Lindsay had relapsed.

The bracelet has now been removed. She is safe, out of custody and presently receiving medical care."

Now “Extra” can reveal what may have caused Lindsay to snap.

Just hours before her arrest, “Extra” spotted Lindsay, her hair disheveled, smoking a cigarette with friends at a restaurant in Los Angeles.

Sources are saying her assistant quit yesterday, sparking the nasty argument that led to the street chase. It’s still unclear if the friend we spotted was the assistant, and why Lindsay later pursued the ex-assistant’s mother.

He says the turning point was when she went to a party last night.

“The party got a little out of control,” explains Perez. “She got into a fight with her assistant. The assistant resigned on the spot.”

Lindsay’s father Michael Lohan, who is recently out of prison for drunk driving and attempted assault, is telling “Extra” today he believes Lindsay is in rehab again.

But he also reveals he fears Lindsay may not survive this time.

“It doesn’t take Einstein or the equivalent of someone who puts M&M’s in order to realize that,” he says.

Michael says he wants a cease-fire in his custody war with estranged wife Dina. He insists that’s what could save Lindsay’s life.

“I know I’m responsible for part of this,” Michael tells us. “We need to clean house and just surround ourselves with the right people and just be well for ourselves as a family.”