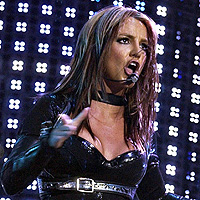 Daimon Shippen might be Britney Spears’ bodyguard, but he is not the pop singer’s new boyfriend, sources tell People.

"He's her bodyguard and manny," revealed a source close to Daimon. "They're not dating."

They may not be a couple, but Brit and Daimon have a long history together.

He was the security guard who helped catch son Sean Preston when she almost dropped him in New York last spring!

Though Brit and her manny have been spotted shopping, lounging at the Four Seasons Hotel in Beverly Hills and even going to church together, sources insist to People that rumors of a potential relationship between the two are “completely false.”

Daimon, a California native described by the source as “funny, but on the quiet side,” is reportedly “tickled” by the attention from the media.

"But he really wants to focus on his job: taking care of the kids and of her," the source said.