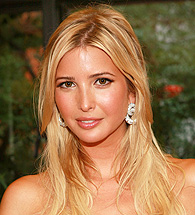 “We need two people,” Barbara said, one for Rosie and another for the long-gone Star Jones.

And the announcement could come any time!

“We will probably know by the end of July,” Barbara revealed.

Today, “Extra” learned that comedienne Kathy Griffin is in the running – and so is a Trump!

The Donald told us, “She's brilliant! She's got the gift of gab, and she would do great, but I don't see it.”

But Ivanka said she won’t be taking a seat on the show, telling Fox News, “I am not joining the show.”

Rosie has been quiet in recent weeks, but "Extra" can reveal she hasn’t fallen off the radar.

The outspoken talk queen just blogged that she’s on a cruise with her family, and she's taking aim at her former co-host.

During her stand-up routine on the ship, Rosie reportedly quipped, “Go have your baby and have a nice life.”

On her video blog, Rosie said to partner Kelli, “If I ever do a show like that, swear you won't let me put it on the air.”

So who do you think should host “The View?” Sound off here!