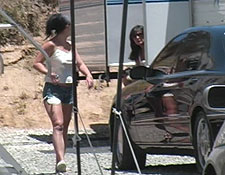 The feud between Britney Spears and her mom Lynne is getting worse, and Britney is taking her complaints to the press.

After dining – alone – at a sushi restaurant in Bel Air, Britney told waiting reporters, “I’m praying for her right now. I hope she gets all the help she needs.”

The bitter comments didn’t do anything to calm rumors that Lynne has a drug problem.

Just three days ago, “Extra” showed you dramatic footage of Britney handing her mom what appeared to be legal papers.

TMZ.com says it was a letter from an out-of-state lawyer requesting that Lynne stay away from Britney’s two children if she were to be taking any medications.

And it looks like a reconciliation isn’t going to happen any time soon.

When the swarm of paparazzi asked Britney if she thought Lynne needed to go to rehab, Brit responded, “I don’t know. I’m concerned.”

As for some sort of ceasefire, Britney said, “In time, who knows what will happen.”

Sources say Britney is furious with her mom for forcing her into rehab in February.

The rift has left Lynne “brokenhearted,” according to People, but Lynne is insisting that things will turn out.

“I’ve got a strong family, and everything is going to be fine,” she told People while shopping in Britney’s hometown of Kentwood, Louisiana.

But it’s still up in the air whether Britney will return to Kentwood any time soon, where Lynne reportedly has begged her to raise kids Sean Preston, 1, and Jayden James, 9 months.