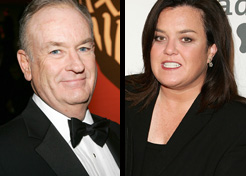 Rosie O’Donnell has found herself in an all-new war, this time with Bill O’Reilly.

“The View’s” loudest voice got the FOX News fireball fired up Thursday night over her comments about the president, September 11th and Iran.

“You want to know why we got into Iran? For the money,” Rosie insisted.

On her website, O’Donnell accused the British of getting their own sailors kidnapped to instigate war. She also blogged, “We will be in Iran before summer as planned.”

Rosie has also voiced conspiracy theories about September 11th, saying, “Buildings do not come down without explosives being involved.”

Now the cantankerous cable guy is on a Rosie rampage.

“Hurting people in my neighborhood who lost loved ones on 9-11, that woman, Rosie O’Donnell is hurting these people directly,” O’Reilly said.

Bill is now issuing a call to arms at the network behind “The View.”

“I think ABC should throw her off the air actually,” Trump told the Don Imus radio show.

But Barbara said “The View” couldn’t be rosier: “We’re having a great time. I hear people who say, ‘I want to watch it more than ever before.’”

Rosie is on vacation all next week, so we’ll have to wait to hear her latest view.