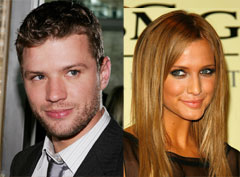 Does Ryan Phillippe, the soon to be ex-husband of Reese Witherspoon, already have a hot new hookup?

According to “Extra” insiders, yes, and his new flame is none other than Ashlee Simpson!

Spy witnesses say Ryan may have shared a hot date with Ashlee over the weekend, and Us magazine’s Caroline Schaffer said they were turning heads at a Hollywood club.

“One club-goer says that Ashlee Simpson and Ryan Phillippe spent about two hours talking, Ryan was mixing vodka cocktails,” Schaffer dished. “They were giggling, having a great time.”

“Extra” will keep you posted on this potential new love connection!