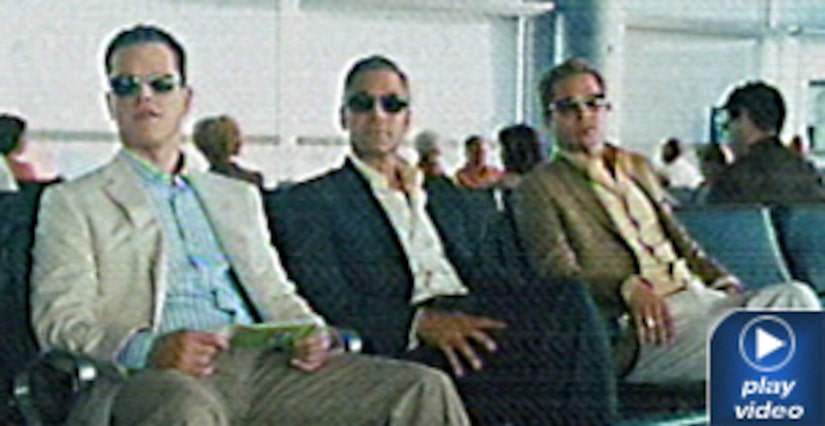 Only “Extra” is taking you behind the scenes of the most anticipated movie of 2007: “Ocean's 13.”

It's an “Extra” first as George Clooney, Al Pacino and super-producer Jerry Weintraub sit down with us on their lavish casino set to talk about the all-new, action-packed heist.

“George tries to fall back on his sexiness a little too much,” Matt joked. “Let's face it; we don't have many more years of that. I mean, he's getting a little long in the tooth.”

The other Sexiest Man Alive, Brad Pitt, is in disguise for “Ocean's 13,” which Brad admitted was “a laugh.”

And what's a cast exclusive without the newest member of the super star-studded cast, Ellen Barkin, whose jet-setting role has her flush with excitement.

The gang is back indeed. And now “Extra” is spilling more “Ocean's 13” secrets!

We are the first to show you the Tiffany-designed diamonds that just may be the target of the “Ocean's” team.

Mr. Weintraub also opened up the doors to his ultra-hip private poker lounge he built just for his cast for the very first time.

“I wanted to show this to the world through they eyes of 'Extra,'” the media mogul said.

You can bet on “Extra” to break all the “Ocean's 13” firsts as the most anticipated sequel of 2007 hits theaters this summer!