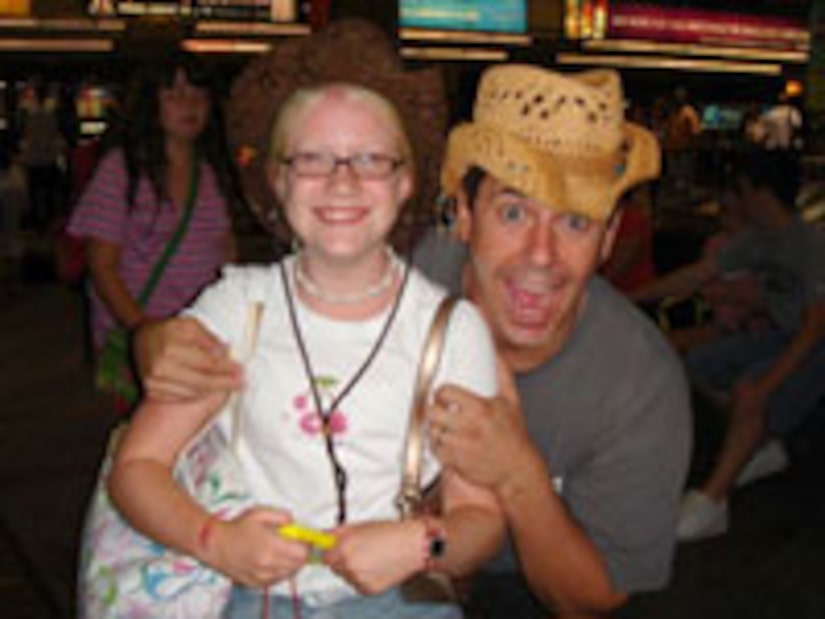 Hi. My name is Abigail Cummings, but everybody calls me Abby. I'm 10 years old, and I'm visiting Las Vegas for the first time. I'm supposed to be relaxing on vacation, but my uncle, “Extra's” Carlos Diaz (he actually makes me put "Extra's" before his name whenever I say it or write it), has asked me to write his blog this week. Even though I have a feeling we're breaking some kind of child labor law, I have agreed to do so. (I mean, the guy did pay for my flight, and he is putting me up in his casita, so I figure it's the least I can do.)

My 8-year-old sister Ally and I flew in on a Wednesday from Indiana. Pat Sajak must be a big celebrity in Las Vegas because right when we got off the plane, I heard a big machine yelling "Wheel... Of... Fortune!” Uncle Carlos tells me that my sister and I are too young to play those games. But how hard can it be? You just sit there with a blank stare on your face and continuously tap a button that says "Spin.” Looks boring.

When we get outside, I quickly learned what a "dry heat" was. It's not supposed to be as bad as the humid heat we get in Indiana during the summer, but it still feels like I'm walking through a hair dryer.

I also learned what "jet lag" is. It's 8 p.m. in the city that never sleeps, and I'm already pooped. I'll see you tomorrow.

THURSDAY:
Carlos says we're heading down to the Hard Rock Hotel to "lounge" by the pool. I inform him that 10 year olds never "lounge," and if we ever did, it certainly wouldn't be at a pool. By the way, my Grandma Carol has a pool in her backyard. It's round and made of cement and has a white diving board. The "pool" at the Hard Rock is not a "pool," it's an island wonderland!! It has trees and waterfalls and sand and a river and the best part of all... it has a waterslide!!!!

I decided to ride the waterslide 27 times strictly for journalistic purposes. Uncle Carlos spent a lot of time in our straw hut that he called a "cabana.” It's the first hut I've ever seen with a flat screen TV, a mini-fridge inside and a waitress.

That night, I got to meet Toni Braxton! (Apparently Carlos has connections.) There's a 20-story tall billboard of Ms. Braxton on the outside of the Flamingo Hotel, but in real life, she's not much bigger than me... and I'm 10! She was really cool, and she has kids, so I was giving her pointers on where she should take them in Vegas... like to see Lance Burton, who we caught on stage at the Monte Carlo after we hung with Toni. Mr. Burton is a magician, but I think he prefers being called an illusionist. I loved his show because he had a bunch of kids my age on stage with him helping with his tric.. uh.. illusions.

FRIDAY:
We dubbed Friday "Mandalay Bay Day.” We kicked off the action at the huge Mandalay Bay wave pool. Every 80 seconds (I counted) a huge wave would push me and my sister all the way into shore. After about 46 waves, we decided to give the "lazy river" a try. Now I have absolutely no idea how this river got its name because none of the adults circling it on their little tubes were being too lazy. A lot of the guys were really into geography because they kept asking girls where they were from. And I guess that whole "don't talk to strangers" talk my parents had with me goes right out the window in Vegas because every girl gave up her info right on the spot. (Although a few of the girls seemed to be kinda confused because I heard them tell one guy they were from one city and another guy they were from another city. Now why would they do that?)

Next we visited Mandalay Bay's Shark Reef. That was really cool. They give you these little things that look like cell phones when you walk in, and you can dial certain numbers to learn about all of the animals inside. They had crocodiles and jelly fish and piranha and, of course, a ton of sharks. Some of the sharks had so many teeth that they can't even close their mouths! (I learned that from that cell phone thingy.)

After we got showered and my Aunt Adrienne did my hair and makeup (don't tell my dad I was wearing makeup), we went to dinner at Mix at the top of The Hotel. Now I'm only in the 5th grade, but I'm pretty sure I could have come up with a more exciting name than "The Hotel.” And it didn't stop there! We went inside "The Hotel" and found "The Coffee Bar" next to "The Store" down the hall from "The Cafe.” And wouldn't you know it, when we got up to Mix, I got an excellent view of "The 15," which is what they call the big interstate that runs through Vegas. (In the Midwest, we'd just call it "15.")

After dinner, "The Valet Man" pulled up "The Car," and our night was over. And in case you were wondering, Uncle Carlos drove. After six Shirley Temples, I was in no condition to get behind the wheel.

SATURDAY:
Now I know I was making fun of Uncle Carlos for hanging out in that "cabana" thing at the Hard Rock pool on Thursday, but I gotta admit, I'm starting to warm up to the concept of luxurious livin'. Saturday, we went to my new favorite pool in the whole wide world: the Neptune Pool at Caesar's Palace. It was super cool!! We had a cabana with every kind of soda pop you could imagine in the fridge, this beautiful woman brought us frozen grapes, like, constantly, our waiter, Leo, let us try a bunch of types of Smoothies and we got to watch MTV on a huge flat screen TV. ("Extra" wasn't on until later... Carlos made us look.)

The multiple Caesar's pools have statues right inside them. And there was no deep end! The place to order food was called "Snackus Maximus" which I thought was hilarious. And NBA All-Star Chris Webber was having a big party at Caesar's that weekend, so there were basketball players everywhere!

We had tickets to go see Gregory Popovich's COMEDY PET THEATRE over at The Aladdin, and we almost blew off that show because the Caesar's pool was so cool. But I'm glad we didn't ditch it because the pet theatre made me laugh really hard. There were cats and dogs doing tricks together, which proves that everybody gets along in Las Vegas.

We had to go back to Caesar's really quick so Carlos could get a tour of "Venus" so he could write about it in next week's blog. Carlos said it's a special pool for adults where some of the girls don't wear tops. Carlos said me and my sister couldn't go in because he would get in trouble with the people at Caesar's. I told him he'd get in more trouble with my dad.

After Uncle Carlos spent 4 hours at "Venus" (I'm just kiddin'... It was more like 10 minutes), we went down The Strip, past my favorite fountains at The Bellagio, to the Excalibur Hotel. It looked like the magic castle at Disneyland!

There we checked out "The Tournament of Kings.” You walk in and sit in a section that becomes your country. We were Ireland. Then you root for the knight from your country. I don't know if they planned this, but our Irish knight looked just like Colin Farrell, only shorter. Oh! I almost forgot! Because you're in medieval times, you have to eat all your food with your hands. No forks! No knives! It was awesome! Our knight won the first completion, but then lost the next two battles. That's okay, he was too short to be king anyway.

As we were leaving the Excalibur Hotel, Carlos sprang a huge surprise: he and Aunt Adrienne were taking us to the real Disneyland the next day! He said it would be like driving from Indianapolis to Chicago if we left first thing in the morning. So that was officially the end of my Vegas Vacation.

I hope my blog will help you decide what to do with your kids when you all come here. I do have to admit one thing... I didn't write about EVERYTHING we did in Vegas. I mean, c'mon, you know what they say: "What Happens in Vegas, Could Get Me Grounded."