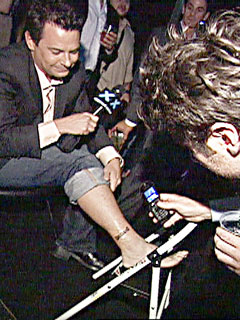 I've got a decision to make, and I need your help. The problem is too detailed to encapsulate, so I'm going to start at the beginning, and your part will come near the end. Don't worry, you're not required to give blood... just your opinion.

A month ago, the cast of the NBC show "Scrubs" was celebrating its season wrap party and DVD release at the GQ Lounge in the Palms Resort and Casino.

I had finished interviewing Sarah Chalke who plays Elliot, when she pulled me close and (totally unsolicited) told me that "Scrubs" creator Bill Lawrence was offering $1,000 to anyone who gets a "Scrubs" tattoo on their body.

I then interviewed the rest of the cast and did some "Extra Takes You There" teases with "Scrubs" star Zach Braff. The evening went well, and I felt we had a fun piece in the can for Extra, so it was time to start wrapping things up.

Zach Braff was about to head into the party when I mentioned to him that I heard about the $1,000 wager.

Now the question that I have been asked the most over the last month by everyone I run into is: "How drunk were you when you said, 'Yes'?"

My response to that question is always, "I was totally sober, dude."

And that consistently prompts this comeback: "So you're crazy then?"

(I'm not a big drinker, and I never drink on the job, but this is the one time when me being sauced would have made my actions more explainable.)

Yes... I agreed to have the "Scrubs" logo tattoo on my right ankle. My buddy, actor Donald Faison (Turk on "Scrubs"), did help me out by doubling the bet to 2 G's before I went under the needle.

The next most asked question I get these days is, "Did it hurt?"

I'm pretty secure in my manhood to confidently say, "Yes... Yes, it did... A lot." Actually, for those of you thinking of getting some ink, it hurts at the beginning, but as the process goes on, the area getting tattooed goes fairly numb.

So I walked... uh... limped upstairs to the VIP area where the cast was enjoying a few adult beverages for the big reveal. They went nuts. And I gotta admit, that was pretty cool.

Donald Faison told me I was crazy but conceded that no other entertainment show would've gone that far for a story. Sarah Chalke offered to lick the fresh wound and then quickly recanted. Mandy Moore (Zach's girl) kept asking me "Did it hurt?!" And Zach Braff promised me a lifetime of exclusive interviews.

And the capper: series creator Bill Lawrence dropped two $1,000 Palms Casino chips into my hand. Yes, I got paid. Promptly. (And then when my wife furrowed her brow at the sight of her husband's new TV show tat, she got paid. Even more promptly. And I learned two large chips can buy a fairly nice handbag.)

So here comes the dilemma. Southern California's leading tattoo removal facility, Dr. Tattoff, has offered to laser "Scrubs" off my ankle free of charge. Apparently, Dr. Tattoff's owners, actor Christopher Knight (Peter from "The Brady Bunch") and James Morel (creator of E!'s “Stardates”) are fans of Extra, and they watched my spur-of-the-moment commitment when it aired. Their people contacted me and reminded me that tattoo removal can be quite expensive, but they are such fans of the show, they would be thrilled to erase it at no cost.

They assured me that Dr. Tattoff has performed more than 15,000 procedures to date. They boasted that there is absolutely no tattoo which they cannot remove, including mine. The conversation wrapped with them telling me they would love to set up an appointment for me to come in and check out their offices in Beverly Hills.

Yes, remove it! After all, the bet was for anyone who GETS a Scrubs tattoo. There was nothing said about having to KEEP the Scrubs tattoo.

No, keep it! I might be seen as a scam artist by the cast if I have it taken off. Also, the next time I interview them, what if they ask to see the ink? If it's gone, the interview could bomb rather than boost from the lifelong Scrubs commitment.

The fate of my ankle is in your hands. Help me out by sending me an e-mail with your thoughts. I'll have the results next week.