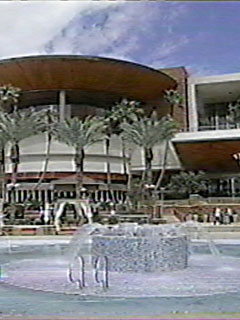 The best new casino on the Vegas Strip is not on the Vegas Strip. The Red Rock Resort & Casino opened its doors this week in Summerlin, which is about 15 minutes east of all the other major casinos. So why am I blogging about a casino built to cater to Vegas locals rather tourists like you? Well, for starters it's a billion-dollar casino! (That's right, construction costs hovered around the "billion" dollar mark... with a "B"!) And to paraphrase Eric Stoltz in "Pulp Fiction," when you experience it, you will know where the money went.

There are more than 400 luxury rooms, nine restaurants, a killer, wide open casino and a new nightclub called "Cherry" which is owned by Cindy Crawford's hubby Randy Gerber.

And one of the coolest things about the hotel portion of the Red Rock is that there is not a single room with a bad view. You're either going to have a great view of The Strip or a great view of the amazing pool. (By the way, if you book a room in Vegas and the person at the front desk says you have a "spectacular mountain view," that means you'll be looking at the parking lot.)

Oh, almost forgot... Sting surprised everybody at the Red Rock grand opening by walking up on stage and doing more than an hour of his greatest hits. The 16-time Grammy winner also performed a Beatles cover that will now allow me to die a happy man.)

"I'm honored to be the first artist to play here," Sting told us. The honor was all ours, buddy.

The night ended with a fireworks display that made New Year's Eve look like a backyard sparkler show.

So the next time you come to Vegas, the Strip might not be the hottest place in town. Check out the Red Rock, and tell me what you think in an e-mail!