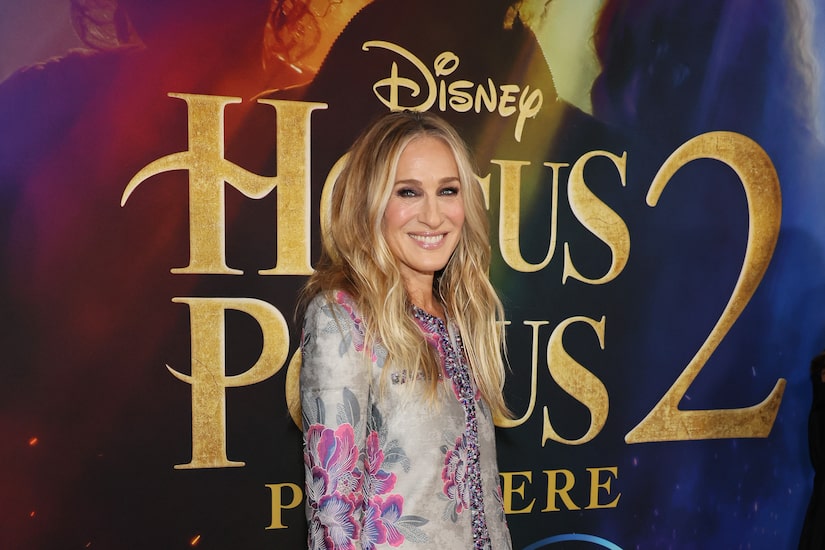 It was a family affair for Sarah Jessica Parker on the purple carpet at the premiere of “Hocus Pocus 2.”

On Tuesday night, Sarah was joined by her husband Matthew Broderick and twin girls Tabitha and Marion. Their son James was not in attendance, since he is at college.

“Extra’s” Tommy DiDario spoke with SJP about reuniting with her coven of evil witches Bette Midler and Kathy Najimy.

When asked if she ever imagined being there for this special moment, SJP said, "Recently I thought about it. For the past three decades, no, I never [thought about it]... I tell you, Bette was the person who had this fervent wish that this would happen and could not be deterred from the idea… You should ask her, ‘cause she will say, 'Absolutely, I always imagined. I've been telling them for years.'"

Sarah also addressed a rumor that she watched the original "Hocus Pocus" for the first time in its entirety to get back into character for the sequel. She explained, "First time since the original premiere. I've seen the movie once and it was at the premiere, just like tonight. I never saw it again, but that's not because of a lack of affection or disinterest. I just don't like to see anything I'm in once, let alone more than once."

Parker went from playing the iconic Carrie Bradshaw to reprising her role as Sarah Sanderson in a matter of hours, which worked in her favor. She noted, "I didn't have time to sort of do what I typically do, which is allow myself to be very nervous, think too much, worry too much, troubleshoot, and I was sort of thrown into it."

Adam Shankman also played the original film for Sarah to help her prep for filming. She said, "It was kind of pretty much what I needed. I had the costume… had the boots, the shoes. I just needed to remember the voice, the sound… and once you're with the other two, it's like you’re a complete person again."

As for possibly playing Sarah again in future films, SJP commented, "Bette is already starting rumors… I hitch my wagon to her star. If she wants to do a third one… No one says no to the Divine Miss M."

In honor of Halloween, Tommy offered her candy. She quipped, "I can eat peanuts because my son isn't here. He's really allergic. Can I take one for my daughters?"

Matthew and their daughters joined in on the treats, too! Matthew thanked Tommy, saying, "Thank you very much, I want that."