Things get hot and heavy between “Selling Sunset” star Chrishell Stause and singer G Flip in their new music video “Get Me Outta Here.”

In the video, Chrishell and G Flip are seen making out everywhere, including in a convenience store and a studio.

In one point, Chrishell even bites G Flip’s lip while they are kissing.

In a statement, G Flip explained the meaning of the song, “’GET ME OUTTA HERE' was written about getting hurt by someone and then being so emotionally done with the drama that you just walk away, peace out, and have literally no f**ks  to give anymore.”

She added, “It was an incredible shoot with an amazing team, including having Chrishell star in it with me. And, I'm proud to say 80% of the crew on set for the video are queer."

Stause’s ex-boyfriend Jason Oppenheim also reacted to the music video after she posted about it on Instagram. Along with a “100” emoji, he wrote, “Such a beautiful video.”

Days before the music video premiere, Chrishell opened up about her sexuality in an Instagram video, sharing, “For me, it is about the person. It is about their heart. I am attracted to masculine energy and I don’t really care about what the physical form is. With G, they identify as nonbinary. They really feel like they are a mix. They identify on both sides of male and female. I personally find [it] such a beautiful mix and it’s probably why we did connect on such a deep level so quick.”

During “Selling Sunset’s” Season 5 reunion, Stause confirmed that they were dating. She said, “I recently have been spending a lot of time with someone that’s very important to me. Their name is G Flip. They’re non-binary, so they go by ‘they/them.’ And they are an extremely talented musician.”

Stause revealed that things started getting romantic after the music video. She said, “It started because I was just going to be in their video. And it's about this chaotic love story. I come from soaps, I love acting. And with the job that we have, I don't always get to do it. At first of course I was like yes, let's do that."

The reality star gushed, “It was so much fun. We had such a blast. Not everyone’s going to be ready for it, but I think it’s great. I think it’s amazing. The song is amazing.”

“Extra’s” Katie Krause recently spoke with Oppenheim on his current relationship with Stause. He said, “We filmed a reunion a few days ago, which will come out, I think, next week… And I think that will explain some of where we’re at… And I think that was a helpful, a difficult but also a helpful day for us… Certainly for me in terms of just, you know, working through the breakup and… our relationship and moving forward.”

He added, “But I’m happy with where we’re at and I think that we’re going to end up in a really good place together.” 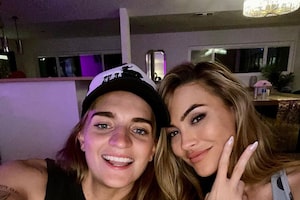 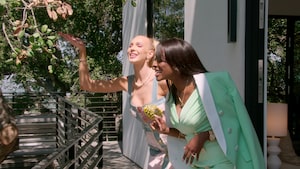 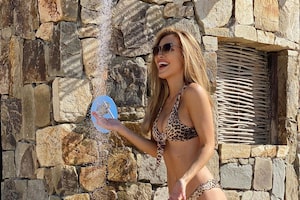