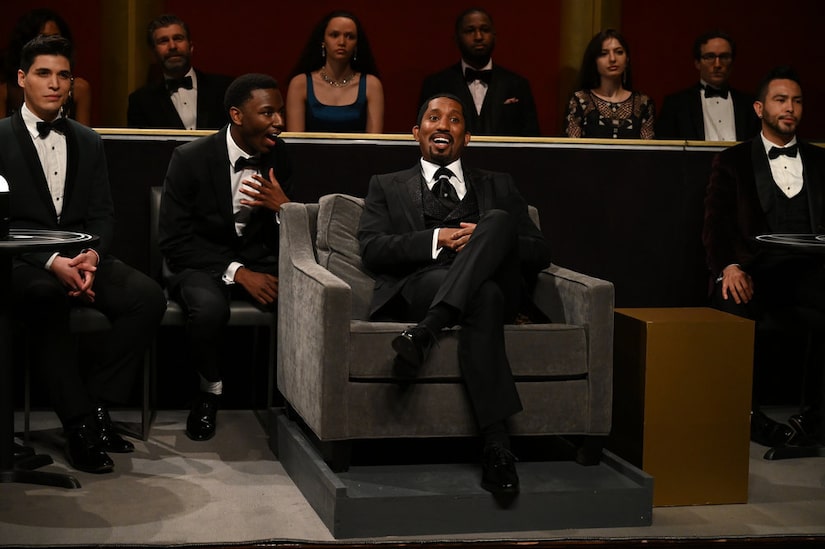 Nearly a week later, Will Smith slapping Chris Rock at the 2022 Academy Awards is still the talk of the town!

In the skit, Carmichael plays a seat filler, who fanboys over Will Smith played by Chris Redd.

The two engage in friendly conversation with Redd even asking for a selfie. However, things change after audio of Chris Rock’s joke about Jada Pinkett Smith plays.

Redd then tells Carmichael, “Hey, I’ll be right back, man,” and then leaves his seat and goes off-frame. A “slap” sound is heard before Redd returns to his seat like nothing happened.

Then Redd says Smith’s infamous words, “Keep my wife’s name out of your f**king mouth!”

Before screaming at the stage again, Reed tells Carmichael, “Man, I love the Oscars, man,” before another seat filler, played by Kyle Mooney, enters the frame.

Mooney sits down after going to the bathroom, meaning he missed the shocking moment, quipping, “Oh, my God, we’re right next to Will Smith. I got to tweet this. Whoa, and he’s trending.”

When he realizes why Smith was trending, he says, “Oh, my God.”

While Redd is trying to engage in conversation with Carmichael and Mooney, they are clearly afraid of him.

Redd then says, “Richard Williams was a fierce protector of his family,” which was part of Smith’s acceptance speech when he won Best Actor.

After Reed says he will be saying that in the acceptance speech, he asks the two seat fillers what else he should say. Mooney answers, “Love makes you do crazy things,” another line in Smith’s infamous speech.

Without acknowledging Chris, Will said, “I want to apologize to the Academy. I want to apologize to all my fellow nominees. This is a beautiful moment and I’m not crying for winning an award. It’s not about winning an award for me. It’s about being able to shine a light on all of the people. Tim and Trevor and Zack and Saniyya and Demi and Aunjanue and the entire cast and crew of ‘King Richard,’ Venus and Serena, the entire Williams family. Art imitates life. I look like the crazy father, just like they said about Richard Williams.”

In Carmichael’s monologue for "Saturday Night Live," he commented on the Oscars fiasco, telling the audience, “Isn’t it kind of crazy — it feels like we’ve been talking about it for so long. This is going to blow your mind — can you believe it’s been six days? This happened a week ago. Doesn’t it feel like it happened years ago? Like doesn’t it feel like it happened when we were all in high school?”

“It happened on Sunday. It’s Saturday, bro,” Jerrod went on. “But Friday, I made a vow to myself that I would never ever talk about it again. Then Lorne came into my dressing room. He was like, ‘I think you need to talk about it.’ He said the nation needs to heal.”

Colin Jost also discussed the Oscars smackdown on “Weekend Update.” He said, “Will Smith, for those of you who don’t know, walked onstage during the academy awards and slapped Chris Rock after he made a joke about Jada Pinkett Smith, which I think was a disgraceful act that sets a terrible precedent for having to defend your wife at awards shows.”

Che was seemingly referencing the persistent rumors that Will and Jada have an open relationship. 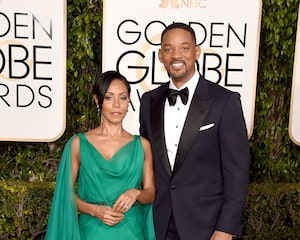 Will explained to GQ, “Jada never believed in conventional marriage... Jada had family members that had an unconventional relationship. So she grew up in a way that was very different than how I grew up. There were significant endless discussions about, what is relational perfection? What is the perfect way to interact as a couple? And for the large part of our relationship, monogamy was what we chose, not thinking of monogamy as the only relational perfection.”

“We have given each other trust and freedom, with the belief that everybody has to find their own way. And marriage for us can’t be a prison,” Smith went on. “And I don’t suggest our road for anybody. I don’t suggest this road for anybody. But the experiences that the freedoms that we’ve given one another and the unconditional support, to me, is the highest definition of love.”

Jost joked, “I think we should just acknowledge that that is one of the craziest things we will ever see in our lives. It’s truly like the Super Bowl wardrobe malfunction, but if Janet’s nipple slapped Timberlake.”

Jost was referencing the 2004 Super Bowl Halftime show, in which Janet Jackson suffered a wardrobe malfunction. 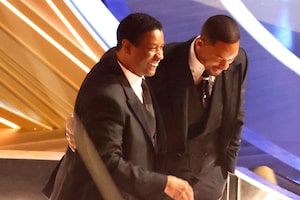 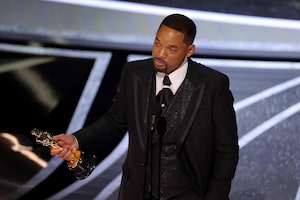 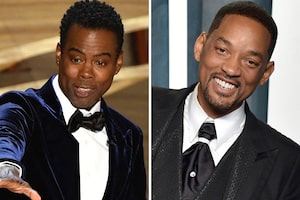