Dwayne Johnson and Emily Blunt are ready to take fans along for a big adventure in “Jungle Cruise”!

“Extra’s” Cheslie Kryst was with the stars in Atlanta chatting about the Disney movie, The Rock’s recent encounter with a hawk, “A Quiet Place 3,” “Black Adam,” and more.

Johnson is one of the biggest action stars in Hollywood, but the actor said he met his match when he was trying to leave for a workout and was stopped in his tracks by a hawk.

He posted a video to Instagram that went viral, showing the hawk and a snake right outside his kitchen.

Dwayne replied, “I am alive… I watched that happen for 30 minutes. The hawk was going crazy, and I was moved by how majestic and big they are and how tense-looking they are in person. Once I posted that, I got thousands and thousands of comments about the symbolism of the hawk.”

When Emily asked if the hawk took the snake with it, Dwayne explained, “At first, it just looked at me pissed, and then just waited there. Finally, I opened the door slowly, and slowly walked out, and it quietly took the snake and flew away.”

The pair see plenty of action in “Jungle Cruise,” based on the popular Disneyland ride. Dwayne plays the boat skipper who reluctantly takes Emily’s character on a mission to find a magical tree with healing powers.

Cheslie called Emily a “huge action hero” in the movie, asking, “What was the scariest stunt?”

Blunt revealed, “I think the rooftop run was a bit scary, but you run a wire so it was not that scary. I always thought I was fine with heights, and then I realized…”

The Rock smiled, saying, “She was scared sh-tless,” adding, “Don’t try and play it cool.”

Emily told Cheslie, “You think you’re fine in the moment, and then you come down to your hands like that,” she said, shaking her hands.

Dwayne is no stranger to the action genre either, and Cheslie commented, “Like jungle movies are now your specialty, two ‘Jumanjis,’ ‘Journey 2’… What’s the secret sauce to a great action scene in a jungle movie?”

The duo have great chemistry on and off the screen. Emily admitted, “I was actually surprised when I met DJ. Our meeting was one of the funniest things. I don’t know why in my head I thought, ‘Oh, he has a larger-than-life personality and he is so loud…’ and I don’t know what happened to me, I know the rules of being in a restaurant with famous people, you don’t draw attention… He walked in and I went, ‘HEY!’ — that loud. Everyone was turning and he just very quietly went, ‘Hi…’ I was surprised by how shy and contemplative and wise and sweet [he is].”

Emily, breaking news about a possible third “A Quiet Place” after the second was a box-office smash, said, “Jeff Nichols this amazing director has come in to work on the next ‘Quiet Place’ installment. [My husband] John [Krasinski] has written something else that he is going to go and do.”

Dwayne, busy with the DC Comics antihero movie “Black Adam,” said, “I wanted to come in the best shape of my life… I wanted to raise the bar… When we first tried on the first costume they had made for me it was padded… We removed all the padding, redesigned the costume.”

“Jungle Cruise” is in theaters and on Disney+ July 30. 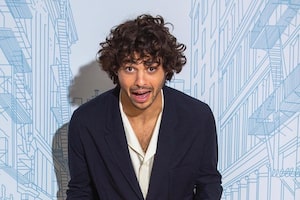 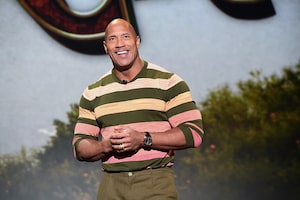 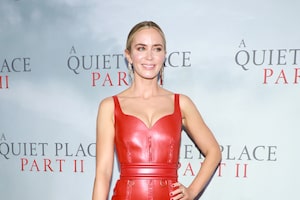