It's a big week for Miranda Lambert! The country music star turns 37 on Tuesday, and is set to perform at the CMA Awards, where she's up for seven awards, on Wednesday.

“Extra's” Rachel Lindsay caught up with Miranda, who talked about what it means to be nominated for Entertainer of the Year.

“Entertainer is definitely special, it's one of those that you kind of work for your entire career,” she said. “It's stiff competition this year, but there are two woman in it which makes me really happy because Carrie [Underwood] and I have come up together the last decade. I'm always such a supporter of hers, I would love to see her take it.”

Lambert went on, “I think it's a well-rounded category this year, and it's also a year where it's less about shows… It's about your whole image and the whole thing that you encompass… what you mean to country music, and I think that's a cool way to celebrate Entertainer of the Year.”

She will be performing live at the show, revealing, “I'm performing a stripped-down version of my single, 'Settling Down.' I decided to do acoustic to keep it simple, it's always fun to just be onstage with a couple of guitars anyway.”

Her husband Brendan McLoughlin stars in the “Settling Down” video alongside her, and she shared, “It was really fun! I actually have never had a love interest in any video; I either burned their house down or wrecked the car… We shot this video at my farm with my longtime friend and director, Trey Fanjoy. I got to ride my horses and be with my husband at our actual house where we have been quarantining the whole year, so it was really special. I'm so thankful to have that on tape because it's my happy place and my husband's beautiful, so why not use him, right?”

Also opening up about taking time to slow down during the pandemic, she said, “I don't think I enjoyed it enough at the beginning because I was in panic mode worrying about my people and getting used to not moving.” The star added, “I'm starting to really embrace 'now' later on in the year. I realized I will be 37 tomorrow, you realize that the road life takes a toll on your body, so it's been nice to get some R&R and regroup with myself.” 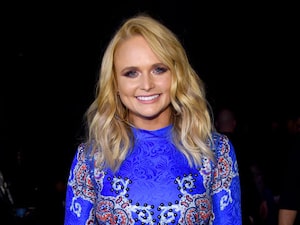 Miranda is working on new music, too! “I didn't write for the first six months. I started writing a lot lately. I think a lot of that has to do with having time and space for your brain to wrap around what's your next direction.”

Lambert is also the executive producer and stars in the scripted podcast “Make It Up as You Go,” alongside other big names like Dennis Quaid and Billy Bob Thornton.

Miranda told Rachel she's a “huge Billy Bob fan,” adding, “I actually had never heard of a scripted podcast before, but my manager brought it to the table and I thought about it, and it is something different, it is something I've never done… I love the premise, being a female singer songwriter trying to make her way, because I've been there.”

The 54th Annual CMA Awards, co-hosted by Reba McEntire and Darius Rucker, will take place live from Nashville's Music City Center Wednesday. Tune in at 8 p.m. on ABC to watch the show.