It was a big night for Jennifer Aniston, who won the Screen Actor's Guild Award for Outstanding Performance by a Female Actor in a Drama Series for her role on “The Morning Show.”

As she gave a heartfelt speech, her ex-husband Brad Pitt was seen backstage watching on the monitors. He had just won his own award for his supporting role in “Once Upon a Time… in Hollywood.”

Lahmers asked Aniston, “Sharing the night with so many other actors, Brad included, he was back here watching you, what do you think?" Jen called it “sweet,” adding, “We've all grown up together, we really have. It just feels like a really fun night to celebrate and cheer each other on and keep working.”

Aniston added, “It is an incredible honor to be recognized by this room especially. They are my peers and I've been doing this a while… It is not lost on me.” 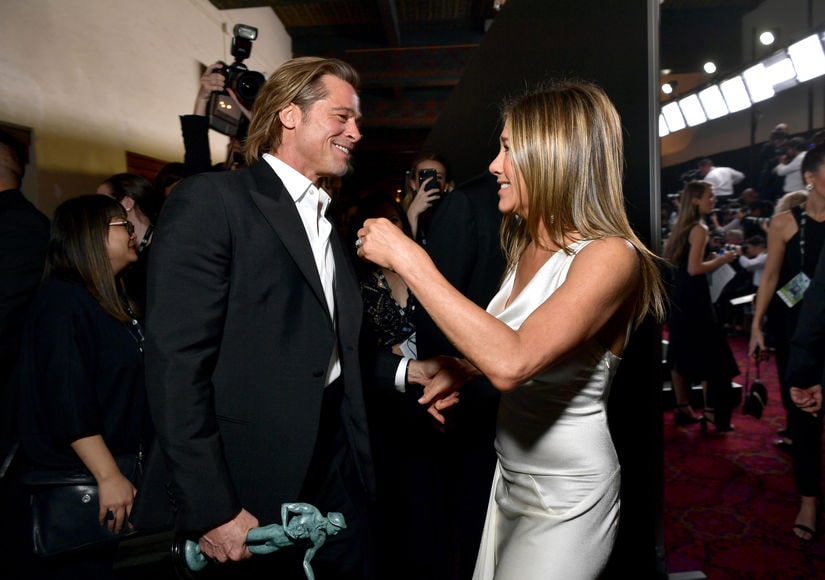 Before her big win, Jennifer talked to “Extra's” Adam Glassman on the red carpet, showing off her white vintage Dior dress.

Jen confirmed she will be back at work on “The Morning Show” soon, saying Season 1 went by fast.

“It was sort of jarring even to us,” she said. “It went fast, but that's 10 episodes for ya… I was used to 22, which would take you for a good couple months… This is a new experience for me. We go back in February.”

Meanwhile, the world is still fascinated by her first hit series, “Friends.”

She said of the show's new fans, “It's interesting that it's still speaking to them or speaking to a whole new generation… I'm thrilled and I love it. It holds you in sort of a time warp.”

So will we get to see the highly anticipated "Friends" reunion? News reports this week said the planned show on HBO Max was stalled. Jennifer said, “It's that thing... we are just trying to make all the stars align.”

Jen is still hanging with her co-stars, recently posting pics on Instagram with Courteney Cox and Lisa Kudrow. She said of joining the social media craze, “It's fun, it's harmless — until it's harmful.”