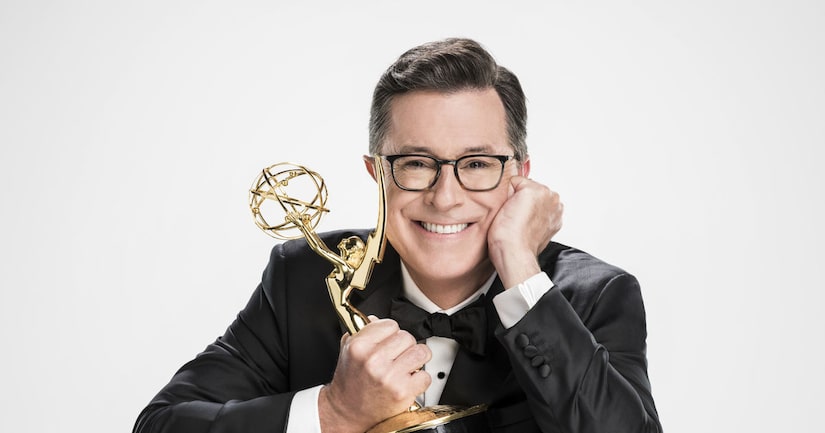 Host Stephen Colbert is taking center stage as the 2017 Emmys are handed out... and "Extra" is there to give you running commentary on the night's festivities!

10:59 p.m.: Outstanding Lead Drama goes to "The Handmaid's Tale"! Fittingly, "The Handmaid's" producer Bruce Miller ended his speech with "Go home, get to work, we have a lot of things to fight for."

10:55 p.m.: Outstanding Lead Actress in a Drama goes to Elisabeth Moss for "The Handmaid's Tale"! To everyone's surprise... she ended her speech by dropping an f-bomb!

10:50 p.m.: Who will take home Outstanding Lead Actor in a Drama Series? The Emmy goes to... Sterling K. Brown for "This Is Us"! Sterling tells his fellow nominees he's a fan! He also thanks his "This Is Us" cast saying they are the best white onscreen family he could ask for.

10:34 p.m.: Nicole Kidman nabbed Outstanding Lead Actress in a Limited Series or Movie for "Big Little Lies." Nicole thanked fellow nominee Reese Witherspoon, saying she wouldn't be there without her! Nicole told the crowd she is also a wife and mother, thanking husband Keith Urban and their two daughters.

10:31 p.m.: Riz Ahmed just won the Emmy for Outstanding Lead Actor in a Limited Series or Movie for "The Night Of"! Riz paid tribute to James Gandolfini, who was a producer on the project, before he passed away.

10:19 p.m.: Norman Lear and Carol Burnett receive a warm reception as they made their way to the stage. They are on stage to present the award for Comedy Series, which is won by "Veep."

10:18 p.m.: Debra brought attention to her fellow nominees, saying she adores them. She mentioned that the show was planning to do an impeachment episode, but ended up abandoning the idea.

10:16 p.m.: Debra Messing and Chris Hardwick are presenting the award for Lead Actress in a Comedy Series, which goes to Julia Louis Dreyfus! She broke a record for the amount of times she has won the category for the same series.

10:14 p.m.: Edie Falco and Alec Baldwin take the stage to hand out the award for Lead Actor in a Comedy Series. And the Emmy goes to... Donald Glover for "Atlanta." Donald makes his second acceptance speech of the evening, saying, "I'm so happy!" He also thanked his partner Michelle, his son, and his unborn son.

10:04 p.m.: Anthony Anderson and Priyanka Chopra step out on stage to give out the award for Variety Talk Series, which goes to "Last Week Tonight with John Oliver." During his speech, he asked, "Where's Oprah," and went on to thank her.

10:01 p.m.: Adam Scott and Craig Robinson hand out the award for Directing for a Variety Series. The "unlucky" winner is Don Roy King for his work on "Saturday Night Live." Don jokes that he has a "short" speech since he has "no problem being short."

9:45 p.m.: Reed Morano wins Directing for a Drama Series for "The Handmaids Tale"

9:35 p.m. Writing for a Comedy Series goes to Aziz Ansari and Lena Waithe for "Master of None"!

9:24 p.m. Supporting Actress in a Drama Series goes to Ann Dowd! The veteran actress is overwhelmed with emotion as she gives her speech. 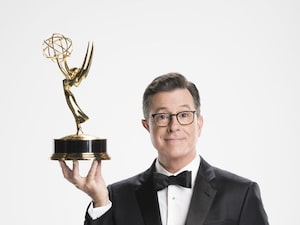 9:17 p.m.: Colbert interviews RuPaul... as Emmy herself! Brilliant! She even talks about dating Oscar and Tony. LOL.

9:12 p.m. The women handed out Outstanding Supporting Actor in a Limited Series or Movie to Alexander Skarsgård from "Big Little Lies." Alexander shared a friendly smooch with co-star Nicole Kidman as he took the stage and went on to thank all the ladies in the cast.

9:09 p.m.: It was a "9 to 5" reunion as Lily Tomlin, Dolly Parton and Jane Fonda took the Emmys stage to slam Trump. The women said they wouldn't take it back then and "in 2017, we still refuse to be controlled by a sexist, egotistical, lying, hypocritical bigot."

9:05 p.m.: Jean-Marc Vallee from "Big Little Lies" is the big winner for Outstanding Directing for a Limited Series or Movie!

9:03 p.m.: Rachel Bloom does a little song and dance to introduce the accountants from Ernst & Young!

8:48 p.m.: Stephen Colbert goes to "Westworld"! Of course he is naked in the diagnostics center, and Jeffrey Wright is questioning him. Stephen takes a jab at Trump as he admits he has been questioning his reality since November 2008! Colbert shows off his various Emmy modes from forgotten acceptance speech to after party guy. The best part... "robot" Titus Burgess is there and ready to rope some cowboys.

8:40 p.m.: Congrats to Donald Glover who just won Outstanding Directing of a Comedy series for "Atlanta"!

8:29 p.m.: Next up... Supporting Actress in a Limited Series or Movie! And the Emmy goes to... Laura Dern from "Big Little Lies"! Laura said she shares this award with her tribe of four ladies, calling herself "incredibly blessed."

8:27 p.m.: Kate MicKinnon just won for Outstanding Supporting Actress in a Comedy Series! Kate is emotional as she thanks Lorne Michaels and others... and then goes on to thank Hillary Clinton!

8:19 p.m.: The Emmys just handed out their first award! John Lithgow nabbed Outstanding Supporting Actor in a Drama Series for his role in "The Crown."

8:12 p.m.: Stephen calls President Trump the biggest TV star of the year... besides Alec Baldwin who played him on TV. Colbert jokes that if Trump had ever won an Emmy for "Celebrity Apprentice" maybe he would not have run for president. Stephen goes on to joke that the Emmys love "morally compromised heroes," so why not give him an Emmy? Fast forward to the real Sean Spicer taking the stage... to talk about the impressive turn out at the Emmys. The crowd bursts into laughter as Colbert thanks Melissa McCarthy for the appearance. Of course, Melissa, who played Spicer on "Saturday Night Live," was watching from the audience.

8:06 p.m.: Colbert's monologue praises TV shows across all platforms from streaming to cable to broadcast... he even takes a moment to ask Milo Ventimiglia how Jack dies in "This Is Us"!

8 p.m.: Host Stephen Colbert kicks off the show with a little song and dance... taking on some of the latest hot button headlines while assuring everyone the "world a little better on TV." Of course stars from favorites like "This Is Us," "Stranger Things," "Veep." Colbert then takes the stage flanked by women from "The Handmaids Tale." 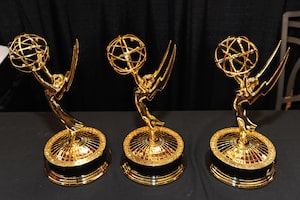 Television Academy & IMDb Will Give Much More Access to Emmys 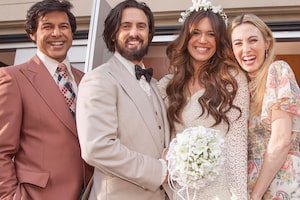 'This Is Us' Loses One of Its Emmy Nominations 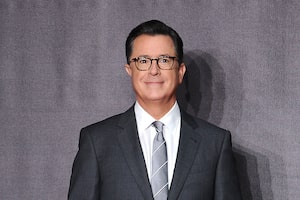