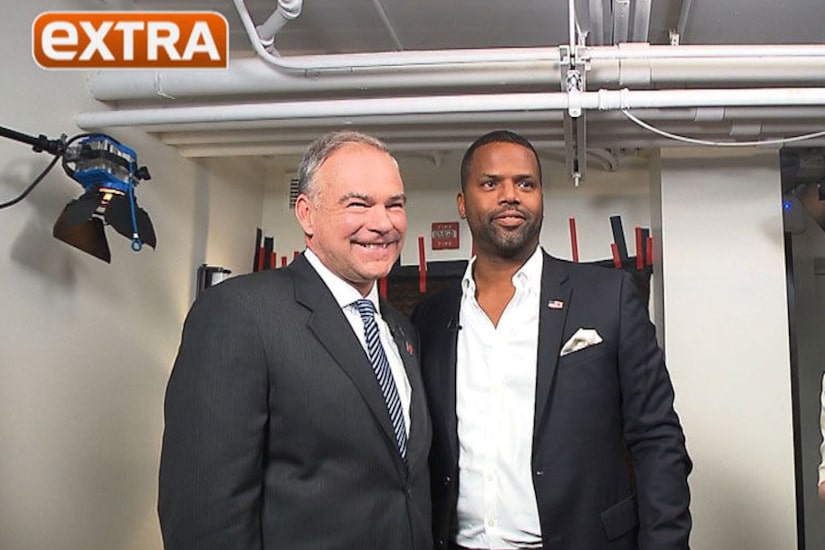 Only “Extra's” AJ Calloway was backstage at “The Late Show with Stephen Colbert,” as Vice Presidential candidate and Virginia Senator Tim Kaine made his TV talk show debut.

Kaine, fresh out of the interview chair, told AJ, “It was great, I had never been on a talk show before. It was fun.”

The senator is supporting Clinton's attack on Donald Trump today after Trump called her a bigot. Clinton did not mince words at a rally in Nevada today, arguing that Trump is “taking hate groups mainstream and helping a radical fringe take over.”

Kaine shared, “You shouldn't play around on this stuff. You know Donald Trump has ties to the white supremacy groups, you know, David Duke, other people like that weighing in and saying positive things about his candidacy.”

He continued, “This is fundamentally about the nation's promise of equality… if we are supposed to do a U-turn or not, so you got to take that seriously, and I'm really glad she just reminded everybody that is what is at stake in November.”

Kaine insisted, “I hope that we see a place that is inclusive and is welcoming and builds a community of respect... that is why it is important that she said that.”

The politician revealed he has never met Donald Trump, but if he did, he knows what he would ask him: “How can you say the things you're saying?”

As a military dad, he would push him on his military stance. “He is going around saying that the American military is a disaster… ridicules a gold star family… makes fun of John McCain because he was a POW – that kind of personality shouldn't be within ten time zones of being Commander in Chief.”

Of course, we had to ask him about appearing on “America's Got Talent” after “Extra's” own Terri Seymour showed executive producer and judge Simon Cowell video of the senator jamming out to the harmonica. Simon decided he wanted to invite Kaine as well as Hillary and the other candidates to the “AGT” finale.

Kaine quipped, “I want a much more forgiving judge than Simon, I'll tell you that, if I am going to be in any contest.” When asked if he would do the live show he said, “I am finding myself doing a lot of things that I didn't think I was going to do, so man, who knows, it might happen.”