“Extra” correspondent Jerry Penacoli talked with President Obama in a rare, one-on-one interview in which the President opened up about his daughters, and life after the White House.

Before the President says goodbye to Pennsylvania Avenue, he wants to make sure the Affordable Care Act works for all Americans -- just like it did for Jerry, when a health crisis nearly cost him everything.

The President's Affordable Health Care Act allowed Jerry to receive the treatment he needed without draining his life savings. Jerry told Mr. Obama, “Thank you, you pretty much saved my finances and you saved my life.” 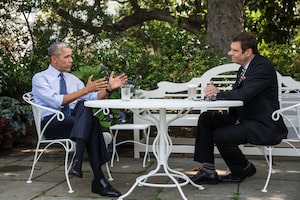 Our Exclusive with President Obama!