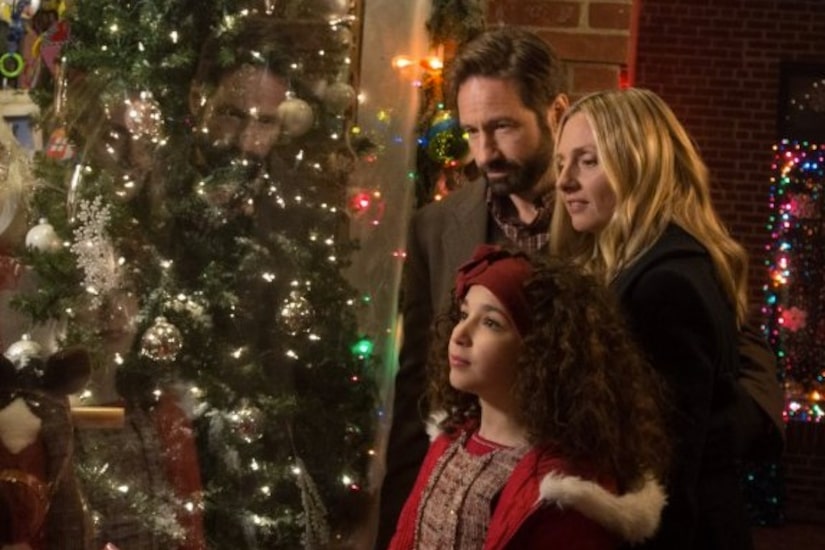 The indie film “Louder Than Words” tells the real-life story of how the rabies death of 13-year-old Maria Fareri spurred her family to build a state-of-the-art children's hospital that allows parents to be part of the healing process.

The film stars David Duchovny and Hope Davis as Maria's parents, John and Brenda Fareri, and Duchonvy spoke with ExtraTV.com about the experience.

Duchovny explained, “As a parent, that was the key to the whole story. I just related to that kind of devastation, and the reaction this family had that they didn't just give up. That they moved outward to help others, which I thought was a beautiful story.”

The actor said the real-life couple, John and Brenda, were on the set with every day.

“They were there the whole time. At first, for Hope Davis and I, it was a little daunting. We weren't doing impersonations. We were doing interpretations, and we didn't want to play fast and loose with their lives and emotions, so on the first day, we thought, 'Hmm, maybe we don't want them around so much.' But then they were so wonderful about everything that we wanted them around after that. We had to get over the initial feeling that we had to do our work and not feel intimidated.”

Young actress Olivia Steele-Falconer, who plays Maria, was truly memorable. Duchovny agreed, “She was the key to the whole movie. She's not in it a whole lot, but you had to have a child that you missed when she wasn't around. You had to have a child who embodied that spirit. So that you walk away from the movie talking about it the way the Fareris viewed it. How this is Maria's movie and this is Maria's hospital as is if she's still with them.”

The film also sheds some light on rabies, which can still be a fatal disease. Maria Fareri was bitten by a bat while camping and didn't know she had the disease until it was too late.

Duchovny said, “I remember hearing about it as a kid, that you had to get a series of shots in your stomach and that it was very painful. That's what I always heard when I was growing up.”

He continued, “But the fact is you don't always know that you've been bitten because these bats are so small. What I also didn't know is that you might not know that you were infected, and if you don't treat it immediately, it's a death sentence. The symptoms can take months to arise and when they finally do, there's just nothing that can be done. That moment in the film, when the doctors say rabies, Brenda Farei, who was a nurse, she just knows.”

“Louder Than Words” is playing in theaters now.