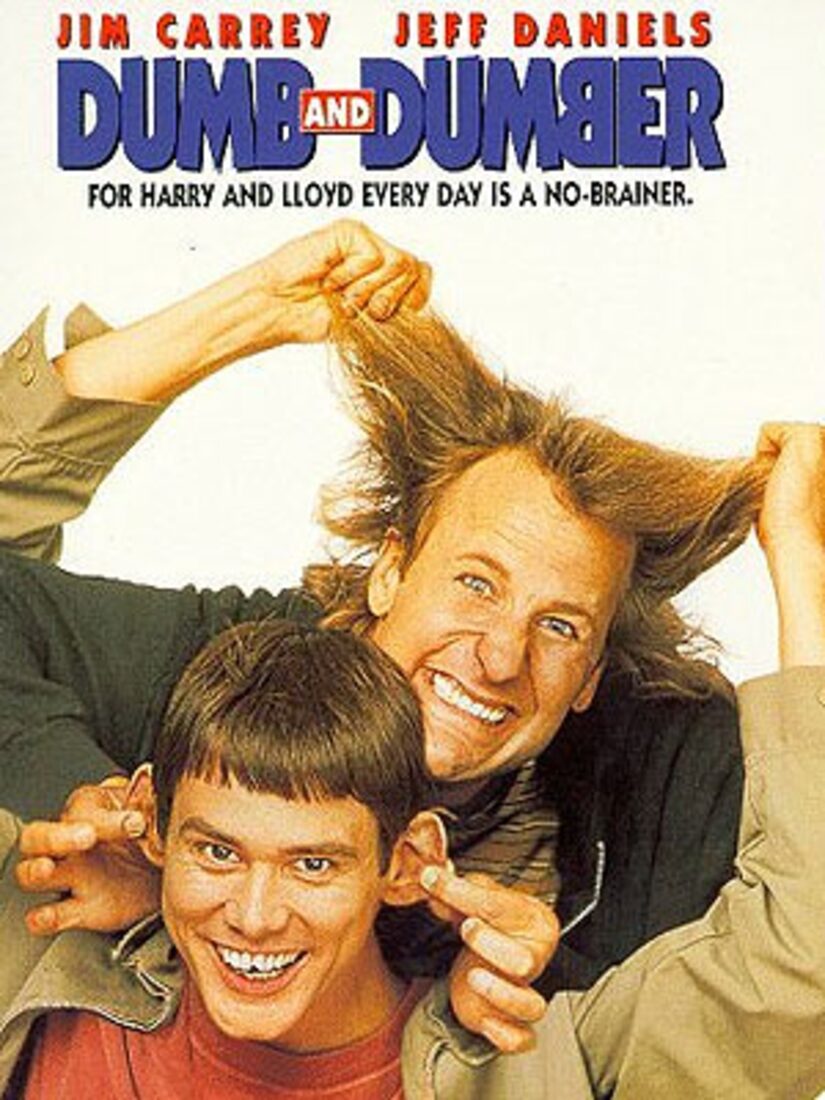 Things are about to get even dumberer with Jim Carrey and Jeff Daniels.

Director Peter Farrelly confirmed to ComingSoon.net he and brother Bobby will be shooting a sequel to their 1994 comedy "Dumb & Dumber," with Carrey and Daniels reprising their roles.

At the junket for their latest comedy, "The Three Stooges," Peter Farrelly said, "We're getting set to shoot 'Dumb & Dumber 2' in September. It's the first sequel we've ever done and we've got Jim Carrey and Jeff Daniels back."

The film was given a prequel in 2003 with "Dumb & Dumberer: When Harry Met Lloyd," but Peter promised the sequel will be a whole new deal.

30 Hilarious Movie Quotes of All Time

Jerry (Jack Lemmon): "Oh no you don't! Osgood, I'm gonna level with you. We can't get married at all."Osgood (Joe E. Brown): "Why not?"Jerry: "Well, in the first place, I'm not a natural blonde."Osgood: "Doesn't matter."Jerry: "I smoke! I smoke all the time!"Osgood: "I don't care."Jerry: "Well, I have a terrible past. For three years now, I've been living with a saxophone player."Osgood: "I forgive you."Jerry: [tragically] "I can never have children!"Osgood: "We can adopt some."Jerry: "But you don't understand, Osgood!"[Finally gives up and pulls off his wig]Jerry: "Ohh... I'm a man!"Osgood: "Nobody's perfect!"

Alvy Singer (Woody Allen): "There's an old joke. Um... two elderly women are at a Catskill mountain resort, and one of 'em says, 'Boy, the food at this place is really terrible.' The other one says, 'Yeah, I know; and such small portions.' Well, that's essentially how I feel about life - full of loneliness, and misery, and suffering, and unhappiness, and it's all over much too quickly."

Jeremy Grey (Vince Vaughn): "Janice, I apologize to you if I don't seem real eager to jump into a forced awkward intimate situation that people like to call 'dating.' I don't like the feeling. You're sitting there, you're wondering do I have food on my face, am I eating, am I talking too much, are they talking enough, am I interested I'm not really interested, should I play like I'm interested but I'm not that interested but I think she might be interested but do I want to be interested but now she's not interested? So all of the sudden I'm getting, I'm starting to get interested... And when am I supposed to kiss her? Do I have to wait for the door cause then it's awkward, it's like well goodnight. Do you do like that ass-out hug? Where you like, you hug each other like this and your ass sticks out cause you're trying not to get too close or do you just go right in and kiss them on the lips or don't kiss them at all? It's very difficult trying to read the situation. And all the while you're just really wondering are we gonna get hopped up enough to make some bad decisions? Perhaps play a little game called 'just the tip.' Just for a second, just to see how it feels. Or, ouch, ouch you're on my hair."

Andy Stitzer (Steve Carell): "You know what my problem is? I am not interesting. What am I supposed to say? I went to magic camp? That I'm an accomplished ventriloquist? Oh, I am the Seventh Degree Imperial Yo-Yo Master. 'Ooh, do me, Yo-Yo Master, I want you to do me cause you're the yo-yo guy!'"

Evan (Michael Cera): "Stay calm, okay? Let's not lose our heads. It's... it's a fine ID; it'll... it's gonna work. It's passable, okay? This isn't terrible. I mean, it's up to you, Fogell. This guy is either gonna think 'Here's another kid with a fake ID' or 'Here's McLovin, a 25 year-old Hawaiian organ donor'. Okay? So what's it gonna be?"Fogell (Christopher Mintz-Plasse) "I am McLovin!"Seth (Jonah Hill): "No you're not. No one's McLovin. McLovin's never existed because that's a made up dumb F**KING FAIRY TALE NAME!"

Rufus T. Firefly (Groucho Marx): "I'll see you at the opera tonight. I'll hold your seat till you get there. After you get there you're on your own."

Terry Hoitz (Mark Wahlberg): "No, I don't like you. I think you're a fake cop. The sound of your piss hitting the urinal, it sounds feminine. If you were in the wild, I would attack you, even if you weren't in my food chain. I would go out of my way to attack you. If I were a lion and you were a tuna, I would swim out in the middle of the ocean and freaking eat you and then I'd bang your tuna girlfriend."Allen Gamble (Will Ferrell): "OK, first off: a lion, swimming in the ocean. Lions don't like water. If you placed it near a river or some sort of fresh water source, that make sense. But you find yourself in the ocean, 20 foot wave, I'm assuming off the coast of South Africa, coming up against a full grown 800 pound tuna with his 20 or 30 friends, you lose that battle, you lose that battle 9 times out of 10."

Happy Gilmore (Adam Sandler): [to his golf ball] "You little son of a bitch ball! Why you don't you just go HOME? That's your HOME! Are you too good for your HOME? ANSWER ME! SUCK MY WHITE A**, BALL!"

Sadie (Maude Apatow): "Where do babies come from?"Debbie (Leslie Mann): "Where do you think they come from?"Sadie: "Well. I think a stork, he, umm, he drops it down and then, and then, a hole goes in your body and there's blood everywhere, coming out of your head and then you push your belly button and then your butt falls off and then you hold your butt and you have to dig and you find the little baby."Debbie: "That's exactly right."

Milton Waddams (Stephen Root): [talking on the phone] "And I said, I don't care if they lay me off either, because I told, I told Bill that if they move my desk one more time, then, then I'm, I'm quitting, I'm going to quit. And, and I told Don too, because they've moved my desk four times already this year, and I used to be over by the window, and I could see the squirrels, and they were married, but then, they switched from the Swingline to the Boston stapler, but I kept my Swingline stapler because it didn't bind up as much, and I kept the staples for the Swingline stapler and it's not okay because if they take my stapler then I'll set the building on fire..."

Bluto (John Belushi): "Hey! What's all this laying around stuff? Why are you all still laying around here for?"Stork: "What the hell are we supposed to do, ya moron? We're all expelled. There's nothing to fight for anymore.D-Day: [to Bluto] "Let it go. War's over, man. Wormer dropped the big one."Bluto: "What? Over? Did you say "over"? Nothing is over until we decide it is! Was it over when the Germans bombed Pearl Harbor? Hell no!"Otter: [to Boon] "Germans?"Boon: "Forget it, he's rolling."Bluto: "And it ain't over now. 'Cause when the goin' gets tough... [thinks hard of something to say] The tough get goin'! Who's with me? Let's go!"

Herman Blume (Bill Murray): "You guys have it real easy. I never had it like this where I grew up. But I send my kids here because the fact is you go to one of the best schools in the country: Rushmore. Now, for some of you it doesn't matter. You were born rich and you're going to stay rich. But here's my advice to the rest of you: Take dead aim on the rich boys. Get them in the crosshairs and take them down. Just remember, they can buy anything but they can't buy backbone. Don't let them forget it. Thank you."

Axel Foley (Eddie Murphy): "Tell Victor that Ramon -- the fella he met about a week ago? Tell him that Ramon went to the clinic today, and I found out that I have, um, herpes simplex 10, and I think Victor should go check himself out with his physician to make sure everything is fine before things start falling off on the man."

Phil Connors (Bill Murray): "This is pitiful. A thousand people freezing their butts off waiting to worship a rat. What a hype. Groundhog Day used to mean something in this town. They used to pull the hog out, and they used to eat it. You're hypocrites, all of you!"

Randolph Duke (Ralph Bellamy): "Exactly why do you think the price of pork bellies is going to keep going down, William?"Billy Ray Valentine (Eddie Murphy): "Okay, pork belly prices have been dropping all morning, which means that everybody is waiting for it to hit rock bottom, so they can buy low. Which means that the people who own the pork belly contracts are saying, 'Hey, we're losing all our damn money, and Christmas is around the corner, and I ain't gonna have no money to buy my son the G.I. Joe with the kung-fu grip! And my wife ain't gonna f... my wife ain't gonna make love to me if I got no money!' So they're panicking right now, they're screaming 'SELL! SELL!' to get out before the price keeps dropping. They're panicking out there right now, I can feel it."

Susan (Jill Eikenberry): "A real woman could stop you from drinking."Arthur (Dudley Moore): "It'd have to be a real BIG woman."

President Merkin Muffley (Peter Sellers): "Gentlemen, you can't fight in here! This is the War Room."

Otto West (Kevin Kline): "Don't call me stupid."Wanda (Jamie Lee Curtis): "Oh, right! To call you stupid would be an insult to stupid people! I've known sheep that could outwit you. I've worn dresses with higher IQs. But you think you're an intellectual, don't you, ape?"Otto West: "Apes don't read philosophy."Wanda: "Yes they do, Otto. They just don't understand it. Now let me correct you on a couple of things, OK? Aristotle was not Belgian. The central message of Buddhism is not 'Every man for himself.' And the London Underground is not a political movement. Those are all mistakes, Otto. I looked them up."

Ferris (Matthew Broderick): "The key to faking out the parents is the clammy hands. It's a good non-specific symptom; I'm a big believer in it. A lot of people will tell you that a good phony fever is a dead lock, but, uh... you get a nervous mother, you could wind up in a doctor's office. That's worse than school. You fake a stomach cramp, and when you're bent over, moaning and wailing, you lick your palms. It's a little childish and stupid, but then, so is high school."

Clark Griswold (Chevy Chase): "We're 10 hours from the f**king fun park and you want to bail out. Well I'll tell you something. This is no longer a vacation. It's a quest. It's a quest for fun. I'm gonna have fun and you're gonna have fun. We're all gonna have so much f**king fun, we'll need plastic surgery to remove our g**damn smiles. You'll be whistling 'Zip-A-Dee Doo-Dah' out of you're a**holes! I gotta be crazy! I'm on a pilgrimage to see a moose. Praise Marty Moose!

H.I. (Nicolas Cage): "Edwina's insides were a rocky place where my seed could find no purchase."

French Soldier (John Cleese): "I don't want to talk to you no more, you empty headed animal food trough wiper. I fart in your general direction. Your mother was a hamster and your father smelt of elderberries."

Dr. Rumack (Leslie Nielsen): "Can you fly this plane, and land it?"Ted Striker (Robert Hays): "Surely you can't be serious."Dr. Rumack: "I am serious... and don't call me Shirley."