Humanitarian George Clooney was arrested Friday outside the Sudan Embassy in Washington D.C. after a planned act of civil disobedience. Clooney and several of his activist colleagues were taken away in handcuffs after three verbal warnings.

Clooney is protesting Sudan's president, Omar al-Bashir, for causing a humanitarian crisis by blocking food and aid from entering the Nuba Mountains in the country's border region with newly independent South Sudan. 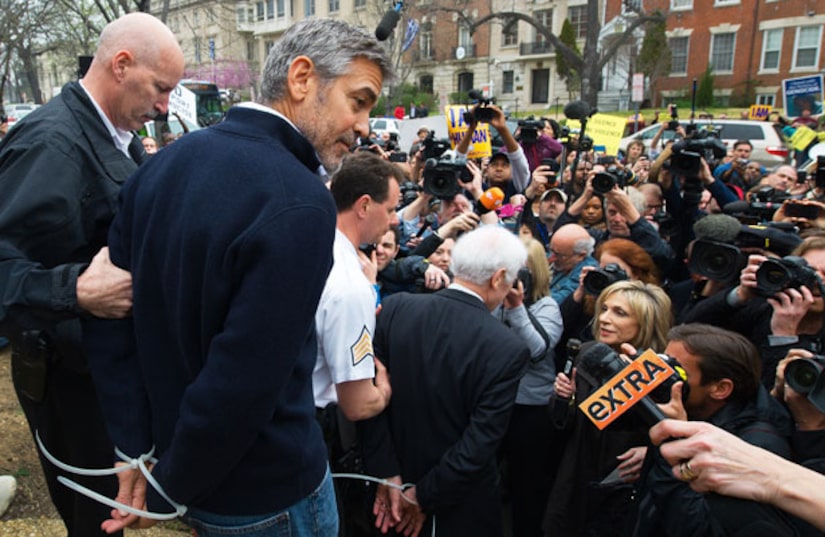 Clooney attended the protest with several other activists, including his father, newsman Nick Clooney, Rep. Jim Moran, Enough Project's John Prendergast and Martin Luther King, III, and said he hopes the move will draw more attention to the issue. 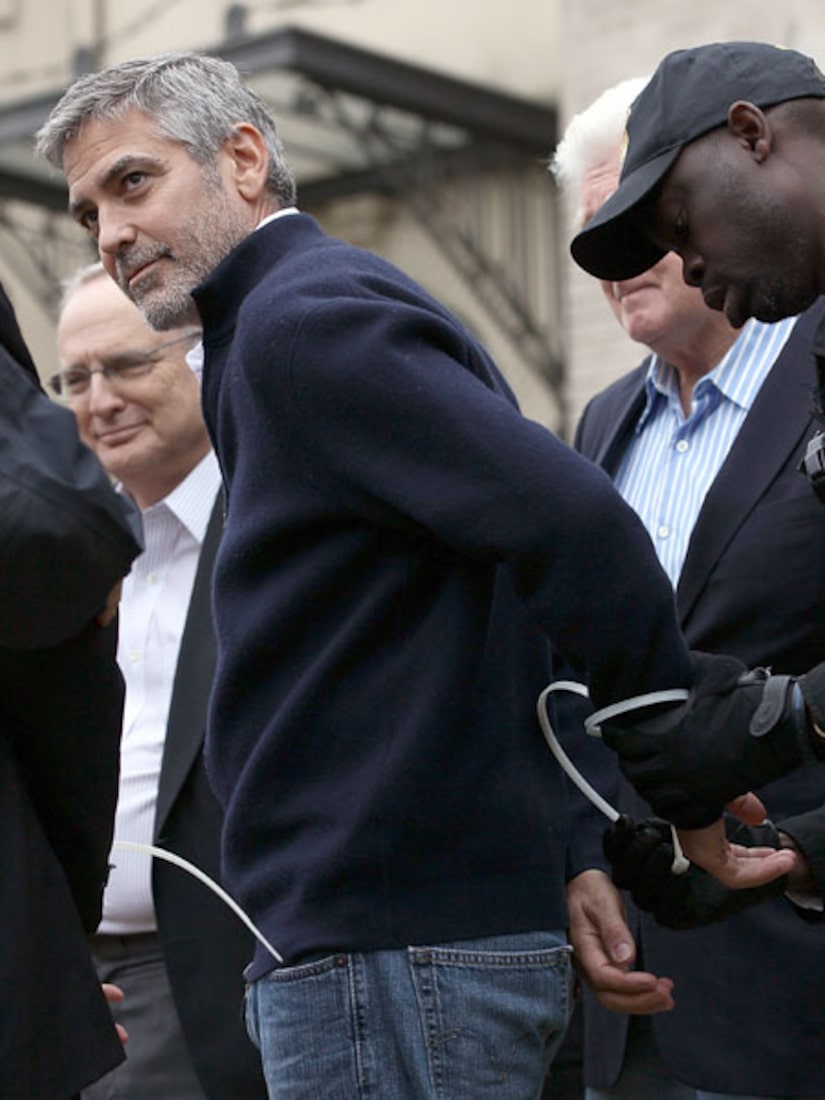 As far as arrests made,TMZ reported, "A dozen people got arrested including congressmen, leaders of the human rights community, Sudanese citizens, and George's father, Nick Clooney." 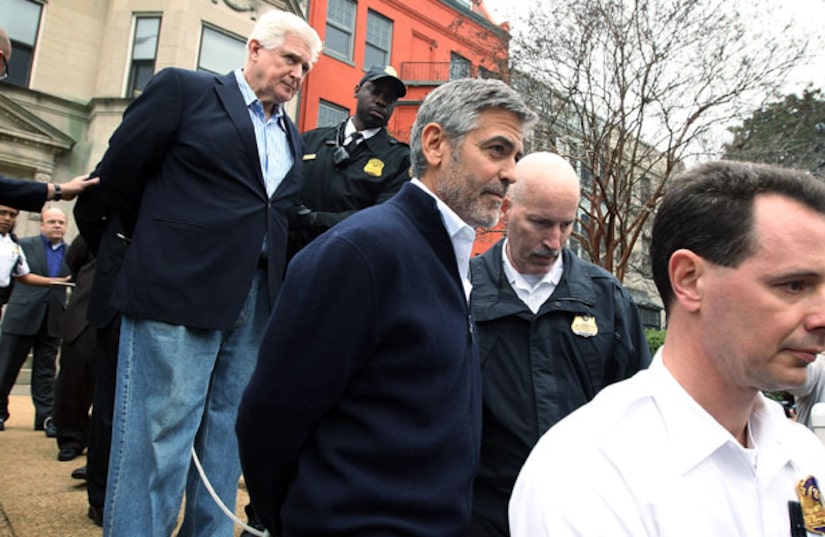 The group of protesters stood on the embassy's private property and held a sign that read: "Sudan: Stop Weapons of Mass Starvation." 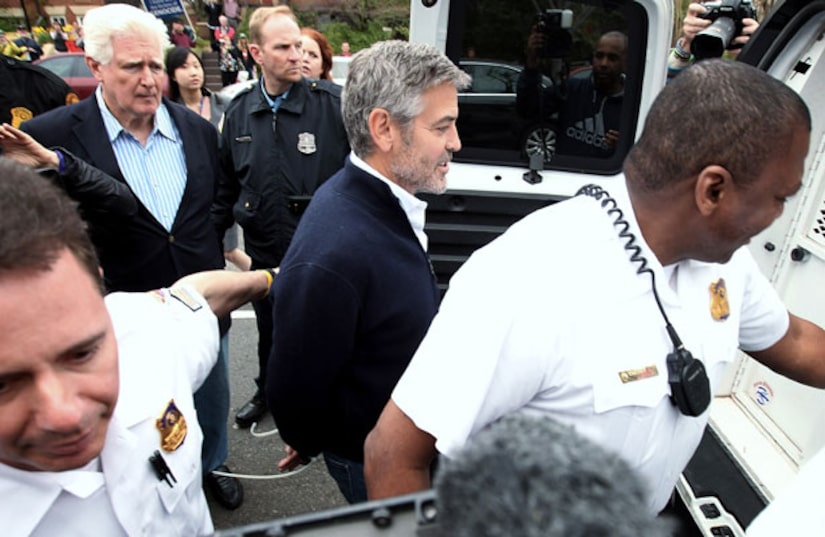 On Wednesday, the actor made an appearance on "Today," and spoke of his trip to Sudan -- describing the tragic killing of civilians from aerial attacks and blamed al-Bashir and other Sudanese government officials, whom he described as war criminals.'

Clooney was a guest at the White House State Dinner on Wednesday evening.

TMZ caught up with George's mother, Nina, who watched her son lead the protest. She said she wasn't worried about his arrest, and added, "I'm extremely proud of him." Watch the video!

George spoke to "Extra" right before his arrest... find out what he had to say!

For more information on George's humanitarian cause, visit enoughproject.org.

UPDATE: Clooney was released from jail Friday afternoon and spoke to reporters about the humanitarian crisis in Sudan. "There really is a ticking clock on this, and we need to get moving."

George was born in Lexington, Kentucky, the son of Nick Clooney, a Cincinnati show host. George studied a few years at Northern Kentucky University and failed to join the Cincinnati Reds baseball club. He came to acting when his cousin, Miguel Ferrer, got him a small part in a feature film.

Remember 'The Facts of Life'?

Clooney co-starred in several TV shows early in his career, including as the handyman George Burnett in "The Facts of Life" and as Roseanne Barr's supervisor Booker Brooks in "Roseanne."

Clooney achieved stardom when he played Dr. Doug Ross on the hit NBC drama "ER" from 1994 to 1999. After leaving the series in 1999, he made a cameo appearance in the 6th season and returned for a guest spot in the show's final season.

'From Dusk Till Dawn'

George's first feature film role was in the 1996 Robert Rodriguez horror flick "From Dusk to Dawn," written by Quentin Tarantino.

Jack Foley: "It's like seeing someone for the first time, and you look at each other for a few seconds, and there's this kind of recognition like you both know something. Next moment the person's gone, and it's too late to do anything about it."

Just Say No to Marriage

Clooney was married once, to actress Talia Balsam from 1989 to 1993, but has vowed to never marry again -- unless it's for a Norwegian bank commercial.

Archie Gates: "You know you're on the path to truth when you smell sh*t, isn't that what they say?"

Captain Billy Tyne: "You'll get a sh*tload of fish. I've gone out before and motored back with so much stock little boys like you had to pack it on the pier. I always find the fish, always! And I will this time. So don't f**k with me!"

'O Brother, Where Art Thou?'

Ulysses Everett McGill: "Deceitful, two-faced she-woman. Never trust a female Delmar, remember that one simple precept and your time with me will not have been ill spent."

Rusty (Brad Pitt): "Why do this?"Danny: "Why not do it? Cause yesterday I walked out of the joint after losing four years of my life and you're cold-decking 'Teen Beat' cover boys. [pause] Cause the house always wins. Play long enough, you never change the stakes. The house takes you. Unless, when that perfect hand comes along, you bet and you bet big, then you take the house."Rusty: "Been practicing this speech, haven't you?"Danny: "Little bit. Did I rush it? Felt I rushed it."Rusty: "No, it was good, I liked it. The 'Teen Beat' thing was harsh."

Fred Friendly: "There's no news, boys, so go out there and make some news. Rob a bank, mug an old lady, whatever - just do something."

Girlfriends from the Past

After an accident on the set of his movie "Syriana," Clooney suffered from back pain, bad headaches, and memory loss. After several spine surgeries, he fully recovered and is fine now. He won Best Supporting Actor for the role as CIA agent Bob Barnes.Bob Barnes: "If anything happens to me or my family, an accident, an accusation, anything, then first your son will disappear, his body will never be found. Then your wife. Her body will never be found either. This is guaranteed. Then, whatever is the most dangerous thing you do in your life, it might be flying in a small plane, it might be walking to the bank, you will be killed. Do you understand what I'm saying? I want you to acknowledge that you do understand so that we're clear and there won't be any mistakes."

Michael Clayton: "I'm not the guy you kill. I'm the guy you buy! Are you so f**king blind that you don't even see what I am? I sold out Arthur for $80 grand. I'm your easiest problem and you're gonna kill me?"

Ryan Bingham: [on getting through airport security] "Never get behind old people. Their bodies are littered with hidden metal and they never seem to appreciate how little time they have left. Bingo, Asians. They pack light, travel efficiently, and they have a thing for slip on shoes. Gotta love 'em."Natalie Keener (Anna Kendrick): "That's racist."Ryan Bingham: "I'm like my mother, I stereotype. It's faster."

'Men Who Stare at Goats'

Mr. Fox: "Why a fox? Why not a horse, or a beetle, or a bald eagle? I'm saying this more as, like, existentialism, you know? Who am I? And how can a fox ever be happy without, you'll forgive the expression, a chicken in its teeth?"Kylie: "I don't know what you're talking about, but it sounds illegal."

Clooney wanted the role of Jack in the 2004 dramedy "Sideways," but the film's director, Alexander Payne, felt that he was too big a star, and turned him down in favor of Thomas Haden Church.Ironically, George is now starring in Payne's Oscar contender "The Descendants."