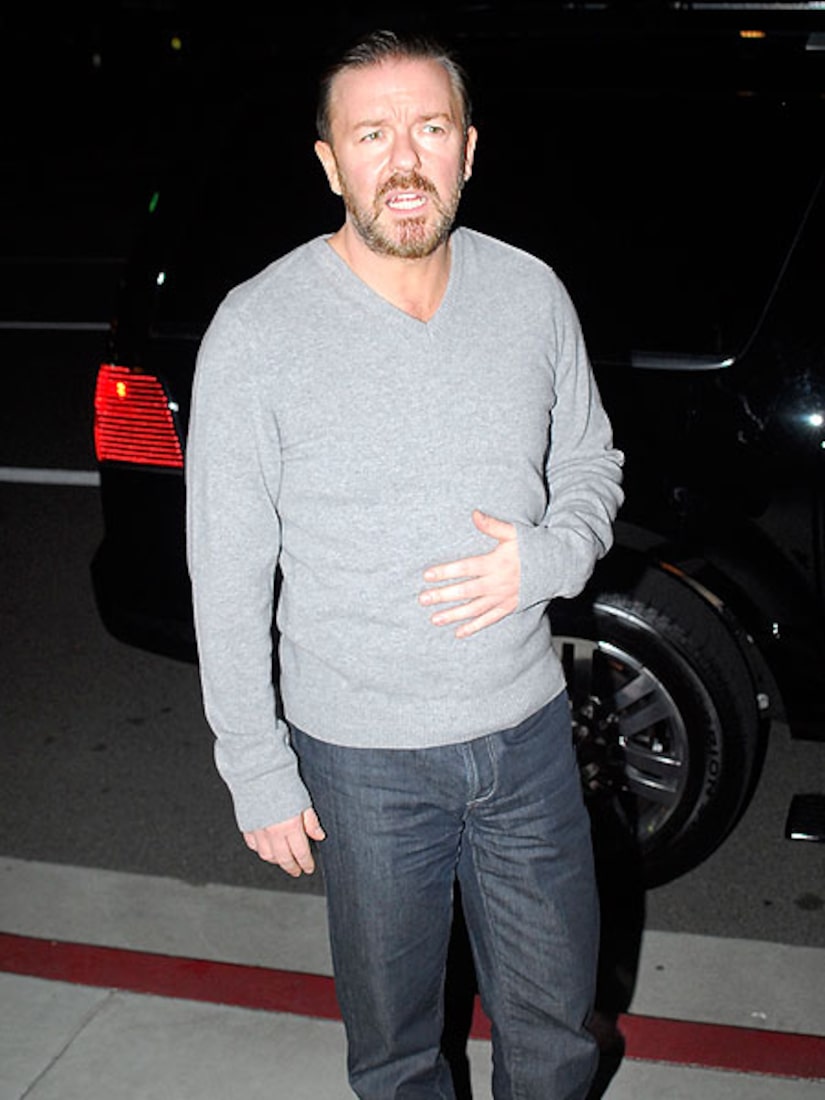 A short time later, he posted another message, "OK. I've got enough protection against Bieber fans now," along with a photo of the actor holding a tiny Pomeranian.

Gervais was bombarded by paparazzi after he hosted the Globes on Sunday. Gervais insisted he won't return for another hosting gig next year.

The comedian was spotted in Hollywood after the big night, and when he was questioned about his celebrity-driven jabs, he replied, "I don't think anyone thought it was offensive, did they? I'm sure they were fine."

A paparazzo inquired about the Jodi Foster "Beaver" joke, and Ricky pointed out, "I didn't see her kids there."

In introducing presenter Johnny Depp, whose film "The Tourist" Gervais made fun of last year, the funnyman actually asked Depp if he SAW "The Tourist." The actor replied, "Uh, no" (Depp has admitted he never sees his films.)

Presenters Rob Lowe and Julianne Moore have a prompter meltdown, then someone off-screen hands them a physical script to read.

Best Actor in a TV Drama winner Kelsey Grammer thanked his wife, Kayte Walsh and makes mention of the future; his reps confirmed Sunday they are expecting twins.

"My Week with Marilyn" winner Michelle Williams said she is a mother first, then an actress and gave a cute speech thanking her daughter, Mathilda. Then Williams made a reference to winning the Globe just like Marilyn Monroe did in 1962 for "Some Like It Hot" (see pic).

George Clooney walked out with Brad Pitt's cane when he introduced a clip from Pitt's nominated film "Moneyball."

Right Back at Ya

Madonna zinged back at host Ricky Gervais when he cracked about her song "Like a Virgin." She quipped, "If I'm still 'Like a Virgin,' Ricky, why don't you come over and do something about it? I haven't kissed a girl in awhile... on TV."

Remember to Mention Your Mother

Gervais let an F-bomb go when he introduced presenters Antonio Banderas and Salma Hayek, saying what lovely people he thought they were but how he couldn't understand an fff-ing thing they said. Antonio came out and jokingly cursed Ricky out in Spanish.

When "Modern Family" won Best TV Comedy, star Sofia Vergara accepted it, in Spanish, with the show's creator, Steve Levitan, translating for her; he didn't always get it right.

In accepting his Globe for Best Actor in a Drama, George Clooney thanked fellow nominee, "Shame" actor Michael Fassbender, for fulfilling the full-frontal nudity quota for the year. Then George said, "You know, you could play golf without your hands..."

Best Actress in a Drama winner Meryl Streep realized she forgot her glasses as she was giving her acceptance speech, even dropping a s**t -- and George Clooney tried to find her some in the audience.