"Mission: Impossible -- Ghost Protocol" took the top spot at theaters for the second straight weekend, grossing $38.3 million and bringing its total to $141.2 million. 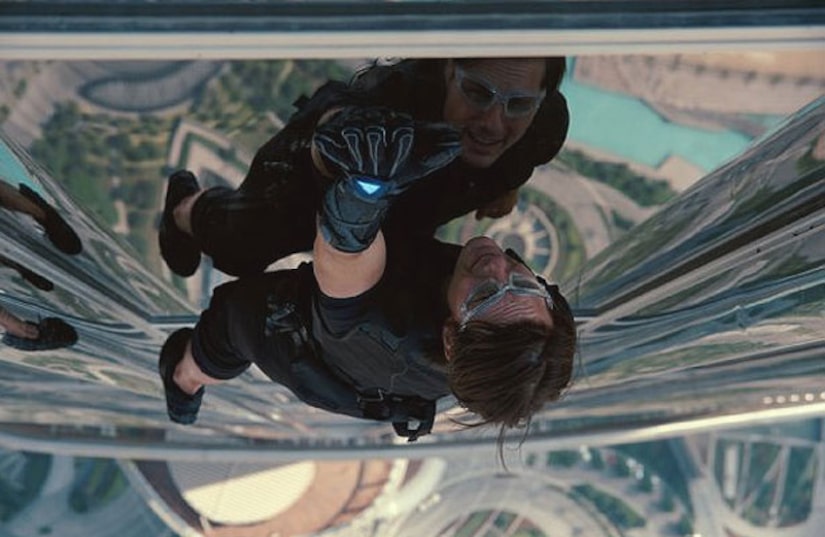 The fourth installment of the Tom Cruise franchise will likely surpass the 1996 original's gross of $181 million.

"Sherlock Holmes: A Game of Shadows" came in second with $26.5 million, lifting its three-week total to $240 million worldwide.

"Alvin and the Chipmunks: Chipwrecked" claimed third place with $21 million, with a total of $97.4 million, while Steven Spielberg's "War Horse" was fourth with $19.2 million, bringing its overall gross to $45.2 million.

The David Fincher drama "The Girl With the Dragon Tattoo" rounded out the top five with $19 million, lifting its total to $60 million.

Who: Michael B. Jordan, Dane DeHaan, Alex Russell; directed by Josh TrankWhat: Three high school friends gain superpowers after making an incredible discovery. Soon, though, they find their lives spinning out of control and their bond tested as they embrace their darker sides.

Who: Denzel Washington, Ryan Reynolds, Vera Farmiga, Brendan Gleeson; directed by Daniel EspinosaWhat: A young CIA agent is tasked with looking after a fugitive in a safe house. But when the safe house is attacked, he finds himself on the run with his charge.

Who: Chris Pine, Tom Hardy, Reese Witherspoon; directed by McGWhat: Two top CIA operatives and partners wage an epic battle against one another after they discover they are dating the same woman.

Who: Taylor Kitsch, Lynn Collins, Willem Dafoe, Ciaran Hinds, Mark Strong; directed by Andrew StantonWhat: Transplanted to Mars via time travel, a Civil War vet discovers a lush planet inhabited by 12-foot tall barbarians. Finding himself a prisoner of these creatures, he escapes, only to encounter a princess who is in desperate need of a savior.

Who: Julia Roberts, Lily Collins, Armie Hammer, Nathan Lane; directed by Tarsem SinghWhat: You know the story... An evil queen steals control of a kingdom and an exiled princess enlists the help of seven resourceful rebels to win back her birthright.

Who: Jennifer Lawrence, Josh Hutcherson, Liam Hemsworth, Elizabeth Banks, Woody Harrelson; directed by Gary RossWhat: Set in a future, the Capitol selects a boy and girl from the 12 districts to fight to the death on live television. Katniss Everdeen (Lawrence) volunteers to take her younger sister's place for the latest match.

Who: Sam Worthington, Rosamund Pike, Édgar Ramírez, Ralph Fiennes, Liam Neeson; directed by Jonathan LiebesmanWhat: Perseus embarks on a treacherous quest into the underworld to rescue Zeus, who has been targeted for capture by his traitorous son, Ares, and his brother, Hades.

'What to Expect When You're Expecting' (May 11)

Who: Will Smith, Tommy Lee Jones, Josh Brolin, Emma Thompson; directed by Barry SonnenfeldWhat: Agent J time-jumps back to the 1960s, where an alien with its sights on the younger version of Agent K poses a threat to the future of the MIB organization -- and humankind's very existence.

Who: Tom Cruise, Catherine Zeta-Jones, Julianne Hough, Diego Boneta, Paul Giamatti; directed by Adam ShankmanWhat: Set in 1987 Los Angeles, Drew (Boneta) and Sherrie (Hough) are two young people chasing their dreams in the big city. When they meet, it's love at first sight, though their romance will face a series of challenges, including rock star Stacee Jaxx (Cruise)

Who: Charlize Theron, Michael Fassbender, Noomi Rapace, Patrick Wilson; directed by Ridley ScottWhat: A team of explorers discover a clue to the origins of mankind on Earth, leading them on a journey to the darkest corners of the universe. There, they must fight a terrifying battle to save the future of the human race.

Who: Channing Tatum, Dwayne Johnson, Bruce Willis, Adrianne Palicki, Arnold Vosloo; directed by Jon M. ChuWhat: The G.I. Joe team faces off against Zartan, his accomplices, and the world leaders he has under his influence.

Who: Colin Farrell, Jessica Biel, Bryan Cranston, Kate Beckinsale, Bokeem Woodbine; directed by Len WisemanWhat: As the nation states Euromerica and New Shanghai vie for supremacy, a factory worker (Farrell) begins to suspect that he's a spy, though he is unaware which side of the fight he's on.

Who: Sylvester Stallone, Jason Statham, Bruce Willis, Arnold Schwarzenegger, Liam Hemsworth; directed by Simon WestWhat: Mr. Church reunites the Expendables for what should be an easy paycheck, but when one of their men is murdered on the job, their quest for revenge puts them deep in enemy territory and up against an unexpected threat.

Who: Sean Penn, Ryan Gosling, Emma Stone, Josh Brolin; directed by Ruben FleischerWhat: A chronicle of the LAPD's fight to keep East Coast Mafia types out of Los Angeles in the 1940s and 50s.

Who: Ian McKellan, Martin Freemen, Cate Blanchett, Andy Serkis; directed by Peter JacksonWhat: Bilbo Baggins, a Hobbit, journeys to the Lonely Mountain accompanied by a group of dwarves to reclaim a treasure taken from them by the dragon Smaug.