Reality star Jenny "JWoww" Farley from MTV's "The Jersey Shore" covers the January issue of Maxim in a barely-there bikini -- showing off her "Woww" factor. 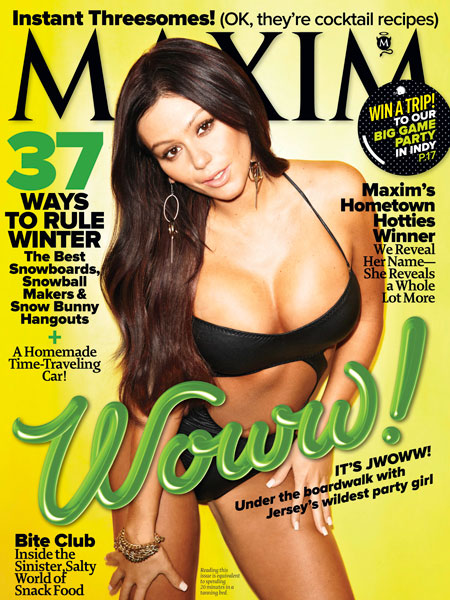 The brunette bombshell talked about the "insane" moments while filming in Italy, saying, "Even watching it is pretty intense! It's very emotional, and I was there and lived it. But we're fine now. We watch it together and laugh at what we went through."

Jwoww has noticeably calmed down over the last few seasons, and the 25-year-old explained that she feels like "the mom [of the group]. I was in a bad relationship during the first two seasons, so I took that out on people that I shouldn't have. I was definitely more of a bitch."

When getting into fights, the curvaceous vixen advises, "Pull your hair back. You don't want some bitch yanking on your hair." Just in time for the holidays.

Nicole was raised by her adoptive parents in Marlboro, New York.

Before "Jersey Shore," Nicole was an aspiring veterinary technician.

Nicole's other self-imposed nickname is "Princess of Poughkeepsie."

Nicole is of Italian-American and Chilean descent.

In 2004, Michael worked as an exotic dancer with the All American Male crew.

Michael was an assistant manager of a fitness center in Staten Island.

Michael is the oldest cast member, 27, in the "Jersey Shore" house.

Sammy is the only New Jersey native in the cast.

Pauly D is a disc jockey from Johnston, Rhode Island.

Pauly D spends around 25 minutes a day on his hair.

In early 2008, Jenni was promoted to Vice President of Marketing for the social networking website IgnitionNation.com.

Vinny comes from a traditional Italian family from Staten Island.

Vinny is a graduate of the State University of New York at New Paltz.

Ronnie is from The Bronx.

Build Your Own Jersey Shore Doll

HeroBuilders.com has created a"Jersey Shore" talking action figure.Now you can design your own doll that looks, talks, and dresses like you! You might want to start saving your money. This mini Pauly D action figure starts at $375!