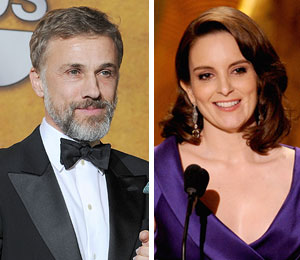 The cast of "Basterds" won the award for best ensemble performance.

"It was an honor to be part of it, Quentin," cast member Eli Roth said as he accepted the award for the cast.

Christoph Waltz also won the best supporting actor statue for his role as a ruthless Nazi in the film. Last Sunday, Waltz won a Golden Globe for the flick.

"30 Rock" co-stars Alec Baldwin and Tina Fey each won for best acting in a comedy series. Baldwin and Fey won the awards last year as well.

"I just wanted to take a moment to say to everyone at NBC, we are very happy with everything, and happy to be there," Fey said as she took the podium.

Other big winners of the night included Jeff Bridges for "Crazy Heart," Sandra Bullock for "The Blind Side," "Dexter's" Michael C. Hall and "Glee."

New Details on What Killed Model Stefanie Sherk at 43 4

Cameron Boyce’s Family Confirms Details About His Death, Plus: His… 5